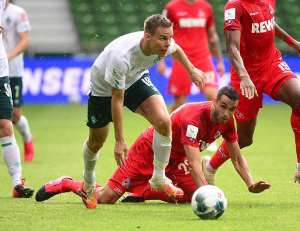 Werder Bremen extended their 39-year stay in the Bundesliga for at least another 10 days when they thumped Cologne 6-1 to avoid automatic relegation on Saturday.

The four-times Bundesliga champions climbed out of the drop zone and leapfrogged Fortuna Duesseldorf to finish 16th in the 18-team table. They now face a playoff against the team that finishes third in the second division. Fortuna lost 3-0 at Union and were relegated.

Werder began the day as favourites to go down as they were two points behind Fortuna with a worse goal difference but raced to a 3-0 lead as Yuya Osako, Milot Rashica and Niclas Fuellkrug scored in a six-minute spell in the first half.

Davy Klaassen added a fourth after halftime, Osako made it 5-0, Dominick Drexler pulled one back and Joshua Sargent scored a sixth to leave Werder with 31 points, one more than Fortuna.

The two-leg playoff is due to take place on July 2 and 6.