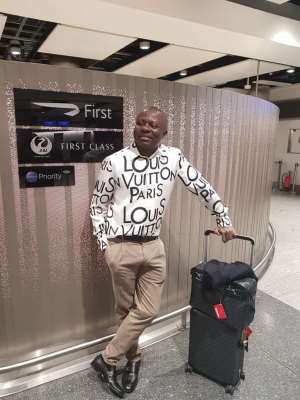 The Chief Executive Officer of Kingdom Herbal and Unique Kingdom Communication Limited, Jonathan Kwame Amofa, has stated categorically that his interest is for the people of Akuapem in the Eastern Region of Ghana to live in peace and unity after a judgment was delivered by the Regional House of Chiefs in Akropong-Akuapem.

Dr.Amofa, a native of the area stressed that the time has come for the people of Akuapem to accept the judgment to bury the past and look towards the future as one united people.

He pledged his support for the process, saying, ''I want all of us to work together to bring about reconciliation among the people of Akuapem. It would not be easy, but I am urging everybody to ensure we accept the judgment and maintain peace and order. We have to try and make sure that we succeed,'' Jonathan Kwame Amofa told Kwaku Dawuro on 'Pae Mu Ka' on Accra-based Kingdom FM 107.7

“It was important for everybody to recognize that without peace and unity, it would be difficult to convince any investor to put their money in the area,'' he added.

He noted that the area had a lot of investment opportunities and expressed confidence that investors would be attracted to the place if there was enduring peace.

He pleaded with people in the Akuapem area to keep his promise of reuniting the Akuapem Traditional area.

The stool has become vacant following the death of Oseadeeyo Addo Dankwa III, Paramount Chief of the Akuapem Traditional Area, who died on August 2, 2015, at the Korle Bu Teaching Hospital after a short illness.

The replacement of the Akuapem Paramount Chief (Okuapemhene) which started with the process of selection of a new Omanhene to replace the late Oseadeeyo Nana Addo Dankwa III has suffered several setbacks with misunderstanding in who becomes the new paramount chief of the Akuapem Traditional Area.

Kingmakers of Akuapem have initiated customary rites to install a new Akuapemhene amidst heavy security.

This was after Abrewatia of the Sakyibea royal family presented one Odehye Kwadwo Kesse to the kingmakers as the chosen candidate from the ruling gate.

The petitioner prayed the court to:
i. make a declaration that per the customs and tradition of the people of Akuapem, verified by statute it is the Abrewatia as opposed to the queen mother of Akuapem who has the sole prerogative to nominate a successor to the stool from a royal gate.