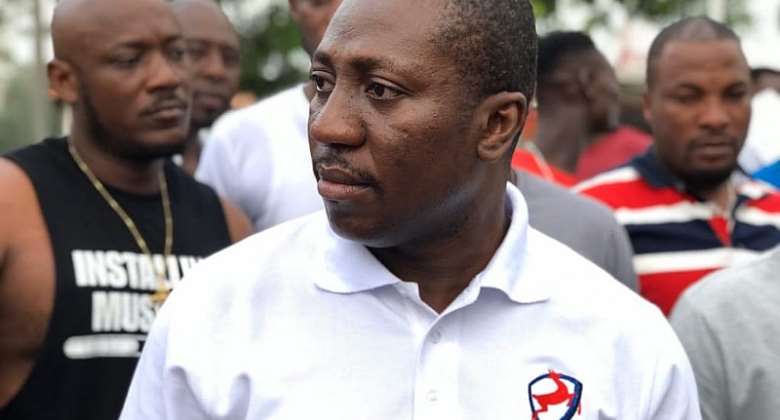 The National Democratic Congress (NDC) Parliamentary Candidate for Effutu Constituency, Janes Kofi Annan, has been dragged to court for stealing an amount of one hundred thousand Cedis GH¢100,000.

This situation has caused some anxiety among members of his party, especially when he was an Independent Candidate who recently crossed carpet to join the NDC and his loyalty now in doubt.

Some of his party members have even doubted his allegiance to the party and argued that if he was truly a loyal member of the NDC, he would not have started campaigning as an independent candidate with his own different colors and emblems at a time he knew the NDC as a party had a candidate.

James Kofi Annan, only became the NDC candidate after the elected candidate, Victor Nkankson resigned from the position.

Though the NDC candidate, James Kofi Annan has denied the charges of stealing, the facts of the matter are that he is said to have between February 5th and 12th this year at the Ghana Commercial Bank (GCB) North Campus Branch dishonestly appropriated the said amount of one hundred thousand Cedis (GH¢100,000)

It is the case of the prosecution led by Ms. Dorinda Azumah that the said amount which was fraudulently transferred into James Kofi Annan’s GCB account number 3051120002103 belongs to one Benjamin Ackah.

The ‘stealing’ court case hanging on the neck of the NDC candidate, James Kofi Annan, plus the question of his doubted loyalty to the party, has created some disaffection for him, making some of his own NDC voters shift support for the incumbent Member of Parliament, Alex Afenyo-Markin.

Alex Afenyo-Markin, in the time being has focused on creating an enabling for job creation and entrepreneurial opportunities for his constituents.

Speaking to thousands of people who has gathered at the Effutu Youth Conference to observe the official launch of the Effutu Dream recently, Afenyo-Markin said from experience, the people of Effutu are not lazy and that they rather take full advantage of opportunities that come their way.

Afenyo-Markin explained: “When I hear people say Effutu Youth are lazy, I laugh at them because they do not know what they are saying. We, Effutus are not lazy. I remember when I decided to buy cars for the commercial drivers in Effutu to work with, many people said drivers are lazy so I should not buy them cars.

“But I went ahead and got as many brand new cars for the drivers and today they are happily working with the cars and no one calls them lazy anymore. They are making their own money through hard work, paying tax to government and are seen as responsible husbands at home.

“We have masons who were not working and they were described as lazy. I said, no, they are not lazy. They need tools to work with. So we bought head pans, trowel, level gauge and other tools masons need. We distributed to them and today they are busily working all over Effutu. No one calls them lazy.

“Today, when you go to the estate site we are building for Effutuman, over 400 Effutu youth are there working because we have provided the training, the push and the environment.

“Same support has been given to several groups of workers and artisans across Effutu. Hundreds of deep freezers have been given to people to start or expand their cold store businesses, hundreds of industrial sewing machines have been shared to our Effutu people who are in dressmaking businesses and today no one calls them lazy

“We have given over hundreds of hair driers to our sisters and mothers in the hairdressing business and today no one calls them lazy anymore because they are working to achieve their dreams.

“We have distributed high spec laptops to teachers across the constituency… we have given even head pans to our sisters and mothers to support their fish carrying businesses at the beach,” Afenyo-Markin noted.