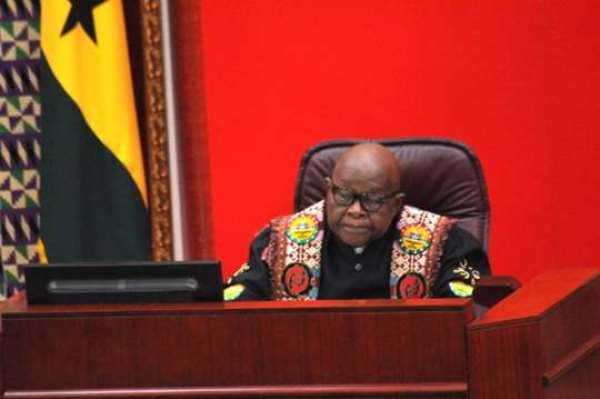 The Speaker of Parliament, Professor Aaron Michael Oquaye, has directed all members of staff of Parliament, not identified as providing essential services critical to legislative business, to proceed on their annual leave with immediate effect.

The directive is part of measures aimed at forestalling the spread of COVID-19 and the Speaker insisted that the directive must be implemented urgently.

The directive, aired on the public address system of Parliament directed that “all officers on contract or temporary appointment, National Service Persons, MPs Research Assistants, and other ancillary service providers working in the premises are required to take their leave and/or keep away from parliamentary precincts, except where they have been identified by the Human Resources Department as providing services critical to the smooth operations of the business of the House.”

The directive asked individuals intending to visit any person in Parliament to visit the person at home or communicate electronically.

“No visitors are allowed in Parliament unless otherwise stated, and individually permitted,” the directive stated.

The Speaker reiterated that the measures were meant to decongest Parliament for safer conduct of essential business.

He suggested that MP research assistants, whilst at home, should continue to provide services to MPs through the Internet.

The Speaker directed the Marshal, who is to be assisted by the Security Unit, to regularly monitor attendance and inspect the various offices to ensure that the directive was fully complied with; and urged the Acting Clerk of Parliament to co-ordinate the implementation of the directive.

Speaker Oquaye assured members of staff that their salaries and other allowances due them would be paid through their individual accounts.

Meanwhile, the House, before adjournment at 1910, agreed to engage in prayers and fasting to seek the face of God in dealing with the coronavirus scare.

Majority Leader Osei Kyei-Mensah-Bonsu, reminded members of President Nana Addo Dankwa Akufo-Addo's request for prayers against the disease, a reminder to which Mr Emmanuel Kwasi Bedzrah, MP for Ho West and President of the Parliamentary Christian Fellowship concurred, and suggested that the House engaged in prayer before it started business the next day.

The Minority Leader and MP for Tamale South, Mr Haruna Iddrisu, said the fasting would implore divine intervention, and those who had ulcer or other ailments and could not fast should support the fast, stressing that sincerity should be cardinal element to the fasting.