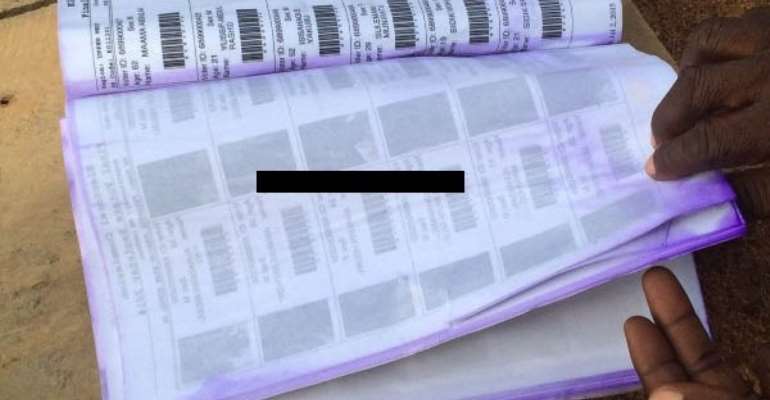 Scores of aggrieved party executives, delegates and staunch grassroots supporters of the ruling New Patriotic Party (NPP) in the Assin South Constituency have threatened to vote ‘skirt and blouse’ in the 2020 elections.

They claim the imposition of Mr. John Ntim Fordjour, the incumbent Member of Parliament (MP) on the party was a recipe for disaster.

Their reaction was in response to the verdict of the Regional vetting committee where seven out of 49 who filled their nomination forms to contest as parliamentary aspirants were disqualified.

Leader of the aggrieved NPP members at a media briefing in Assin Darmang, the district capital, Yusif Ibrahim revealed this after the Regional Vetting Committee named the incumbent MP as the sole candidate for their upcoming primary in the constituency.

They will change their minds only if national executives rescind their decision on Mr. Kofi Damptey's disqualification adding that "the party members are discontented about the party’s functional executive committee’s decision to disqualify their preferred candidate to contest the parliamentary primaries."

Their preferred candidate, Mr. Kofi Damptey was disqualified by the Party’s vetting committee who had contested the seat since the year 2000.

He added that the decision reached by the Party will affect the electoral fortunes of the party in the Constituency and noted that "The party members are discontented about the party’s functional executive committee’s decision to disqualify their preferred candidate to contest the parliamentary primaries."

According to them, Mr. Kofi Damptey's disqualification as a well-calculated plot orchestrated by some Party stalwarts in the constituency to allow the MP to go unopposed regardless of his abysmal performance.

“We have a big problem now because our MP and some faceless constituency and regional executives are not making the party attractive to the youth. I don’t hate him but I hate his politics.

" If the executives believe our MP is doing well and loved by all, then why are they going all out to protect him. The MP is afraid of his abysmal performance and we will show him our dislike if he is allowed to be contested or not,” he stated.

He said they have decided to vote for the party's presidential candidate, President Nana Addo Dankwa Akufu-Addo and vote for any other person to become their MP.

“We will campaign vigorously against the incumbent MP if he is made our candidate. He is not a winnable candidate,” he added.

A former constituency executive who preferred to be unanimous narrated various actions and inactions of the MP and some executives that had affected electoral fortunes of the party in the constituency.

He warned that "if the NPP imposes the MP as its 2020 candidate, they should prepare to lose that seat."

"When we invite him over an issue, he tells us that he doesn’t have time and for the four years that he has been the MP. The party has been "hijacked" by the MP and "Jakai mafia." They have taken over all positions."

Mr. Ibrahim, peeved by the decision said we believe, it does not reflect the interest of delegates in the constituency. The decision is disappointing and disgraceful.

In all of these, Mr. Damptey, the disqualified aspirant who was obviously worried about the turn of events called for calm among his followers and pledged his commitment to seek redress through the party structures.