My Respect For Mills Is Unchanged - Rawlings 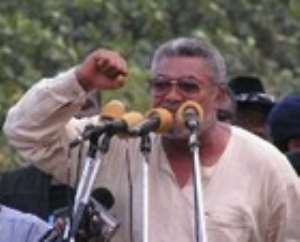 Ex-president Rawlings has reiterated his continued respect and admiration for
his former vice President, Prof. J.E.A Mills. In an interview with The Lens, ex-president Rawlings decried the vicious attempts by sections of the NPP sponsored media to create the false impression that he is against the candidature of the former NDC flagbearer. “Prof. Mills continues to be a great asset to the NDC.

I will be the last person to fail to acknowledge that,” the NDC founder said. Ex-president Rawlings however explained that the NDC is blessed with other individuals who also possess great moral, intellectual and leadership attributes. “That is why in spite of my respect for Prof. Mills, I fully support an open and fair contest to be organised for all the formidable individuals who will bring themselves forward.

At the end of that, I believe the party will come out with the best individual to lead us into the 2008 electoral battle.” Some publications had suggested that the former president was behind the candidature of Dr. Ekwow Spio-Garbrah. One of the most recent publications introduced the name of Eddie Annan as the new man ex-president Rawlings is now backing. Other reports had earlier suggested that there are moves to partner Spio-Garbrah and former first lady, Nana Konadu Agyeman Rawlings.“I have not thrown my support behind anybody,” the ex-president re-asserted. “My desire is for the party to choose a committed and competent person from the rich array of individuals who will be vying for the top position.”
The Lens