Sogakope: Chilling Account Of How Service Rifle With 30 Rounds Of Ammunition Got Lost

...At The Police Station 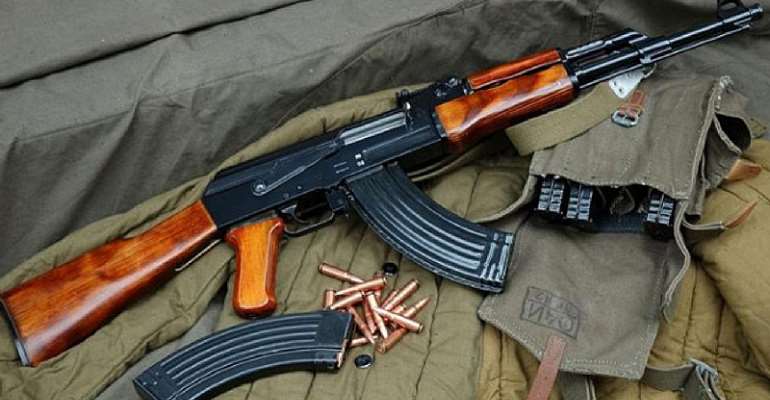 Reports of the arrest and detention of two police officers of the Sogakope Divisional command have been confirmed in a press release from the Volta Regional Police command which was sighted by WestAfrica24.com.

However, the reason for the officers' arrest has nothing to do with the death of the Sogakope South Assemblyman but rather a missing rifle which was fully loaded with 30 rounds of ammunition.

Fortunately, WestAfrica24.com has brought to you a detailed account of how the service rifle got missing from the police station as narrated by a police source.

Below is the full detailed account of what happened.

On march 7, 2020 at about 4:30am the station officer C/Inspr. Frank Tsigbey visited the charge office and he was informed by the station orderly no.54958 G/Const. Charles Yeboah that at about 3:30am he could not set eyes on s/v rifle no. ghgp/vr/sk/az 5426-12 which was loaded with 30 rounds of ammunition with extra 9 rounds kept in a container locked at the counter.

The station officer examined the drawer and found it to be intact without any damage to the counter drawer. The station officer and C/Inspr. David Fiamor interrogated remand prisoners, Charles Awuye and Ransford Gbeve who slept in the cell corridor. The remand prisoners gave description of no. 52041 G/L/Cpl. Osei Sarfo as the officers they saw behind the counter in uniform at about 1:00am midnight and he picked an old calendar on a chair while the orderly rested his head on the counter.

The divisional commander C/Supt. Mr. Dennis K. Fiakpui was informed and he instructed that search should be conducted on him [G/L/Cpl. Osei Sarfo].

A team led by the acting Sogakope district commander, C/Supt. Joseph Atsu Dzineku went to the residence of the lance corporal. All the places he used to stay including his barracks at Agave Asidowui were searched but nothing evidence was discovered.

However, an identification parade, conducted in the station officer's office led to the arrest of 52041 G/L/Cpl. Osei Sarfo and one other, G/Const. Yeboah Charles after they were identified by the two inmates who slept on the corridor as the one they saw at the counter.

On the instruction of the Divisional Commander, G/L/Cpl. Osei Sarfo and G/Const. Yeboah Charles was arrested and detained to assist the investigation.

Meanwhile, a query was drawn on the station officer C/Inspr. Frank Tsigbey to explain why disciplinary action should not be taken against him for detailing a constable for last out duty.