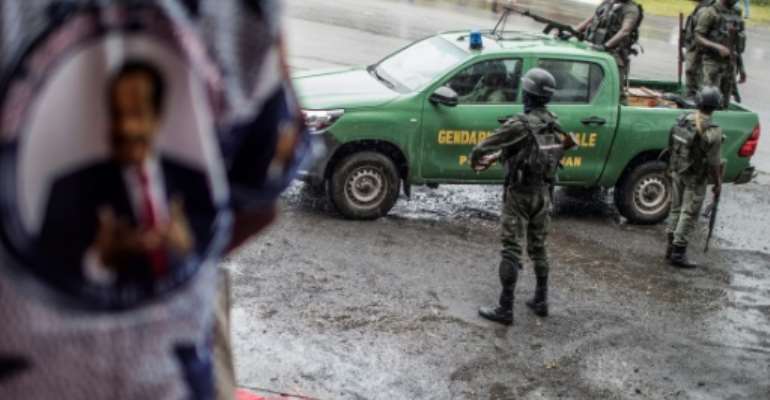 Two regions that are home to Cameroon's anglophone minority are in the grip of 29-month-old conflict between the armed forces and separatists. Rights watchdogs say atrocities and other abuses have been committed by both sides. By MARCO LONGARI (AFP)

Human Rights Watch on Tuesday accused Cameroon's armed forces of taking part in the killing of at least 21 civilians this month in a region where troops are battling anglophone separatists.

"Government forces and armed ethnic Fulani" carried out the slaughter in Ngarbuh, whose victims included 13 children and a pregnant woman, HRW said.

The Fulani are an ethnic group also called Peuls.

"The gruesome killings of civilians, including children, are egregious crimes that should be effectively and independently investigated, and those responsible should be brought to justice," said Ilaria Allegrozzi, HRW's senior Africa researcher.

"Denying that these crimes have occurred adds another layer of trauma to survivors and will only embolden government troops to commit more atrocities."

The army says there were only five civilian deaths, which it said happened when fuel containers exploded in a firefight.

The incident occurred on February 14 in a remote part of the Northwest Region -- one of two English-speaking regions gripped by conflict sparked by demands for independence from majority French-speaking Cameroon.

More than 3,000 people have died and at least 700,000 have fled their homes in the nearly 29-month-old unrest. Rights monitors say abuses have been committed by both sides.

HRW on Tuesday said it drew its conclusions after interviewing 25 people, including three witnesses to killings and seven relatives of victims. It also reviewed satellite imagery taken before and after the attack.

Between 10 and 15 soldiers, including members of the elite Rapid Intervention Battalion, along with at least 30 armed Fulani, entered Ngarbuh, a district of the Ntumbo village, at around 11:00 pm (2200 GMT) on February 13, it said in a statement.

After hours of looting homes and beating civilians, some of these men attacked the so-called Ngarbuh 3 district, "killing 21 civilians in four homes, then burning the houses", it said.

The military told the residents "the attack was to punish civilians suspected of harbouring separatist fighters", HRW said, quoting 12 witnesses.

Opposition figures in Cameroon swiftly accused the armed forces of having played a role.

The Movement for the Rebirth of Cameroon (MRC), one of the two main opposition parties, blamed "these crimes" mainly on the regime and the head of the security forces.

A key figure in the separatist movement, lawyer Felix Agbor Mballa, in a Facebook post also accused "state defence forces" of carrying out the killings.

On February 17, army spokesman Colonel Cyrille Atonfack Guemo said the deaths had resulted from an "unfortunate accident" when fuel was set ablaze during a gunfight between troops and separatists.

He said the exchange of fire came after four soldiers and two gendarmes, on nighttime reconnaissance, had come under heavy fire.

The following day, the UN rights office in Geneva said 23 had died in the "shocking episode" and urged Cameroon to carry out an "independent, impartial and thorough" inquiry.

English-speakers account for nearly a fifth of Cameroon's population of 24 million, who are majority French-speaking.

The presence of this minority dates back to European colonisation of Africa in the 19th and 20th centuries.

Once a German protectorate, Cameroon was split between Britain and France after World War I.

As tensions in the anglophone regions rose, President Paul Biya, 87, vetoed appeals by moderates for a return to Cameroon's federal system. By Ludovic MARIN (AFP)

The French-administered territory became independent on January 1, 1960. The British section followed in 1961, part of it merging that year with French Cameroon in a federation.

In 1972 the federal arrangement was dropped in favour of a single United Republic of Cameroon.

Years of grievances at perceived discrimination against English-speakers snowballed into a declaration of independence in the anglophone regions in October 2017, which was followed by a government crackdown.

The declaration has not been recognised internationally and President Paul Biya, in power for 37 of his 87 years, has refused demands to return to the federal system.

However, the government has lately decentralised some of its powers after a "national dialogue" on the anglophone crisis which was boycotted by the separatists.