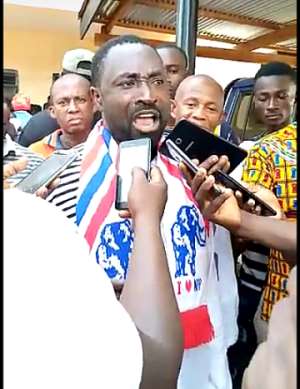 Atwima Mponua constituency parliamentary seat is like to shift following massive support given to a contestant, John Ofori Atta, by the New Patriotic Party (NPP) delegates who accompanied him to submit his parliamentary nomination form.

John Ofori Atta, who is the Chief Executive Officer for the Mpasaatia Community Mining at the Atwima Mponua District, was given a rousing welcome by both party delegates and supporters who traveled from afar to Nyinahin, to support him in filing his form.

The Atwima Mponua seat in currently been held by the Minister of Youth and Sports, Hon. Isaac Kwame Asiamah.

Commando is remembered by the constituents for the developments brought to the area, including the building of classroom blocks at Abesua, Okyerekrom, Yaw Kusikrom, Bedaabour, creating employment for more than fifty people in his mining firm among others.

Speaking to the media at the party office after his submission on Monday, February 17, 20202, he expressed his gratitude to the constituents for supporting him and believed allowing him to represent them at the Parliament in 2021 is based on his selflessness of developing the area.

“I am really overwhelmed by the support given to me today. This clearly shows that people will not disappoint me during the parliamentary primaries. My objective is to continue helping the needy and developing the area. The people of Atwima Mponua deserve more than what is being done here,” he said.

“During my tenure as a Presidential Staffer under Mr. Kufuor's regime, I was able to recruit people from Atwima Mponua into the Police, Prisons, Aviation, Local Government, build a lot of classroom blocks across the constituency. If I was able to do all these on my own, there is a great chance that I can do more when I represent the people in Parliament,” he boastfully added.

Some of the party delegates who accompanied John Ofori Atta, promising to vote for him during the primaries, asked their fellow delegates to overwhelmingly vote for him to bring more developments to the area.