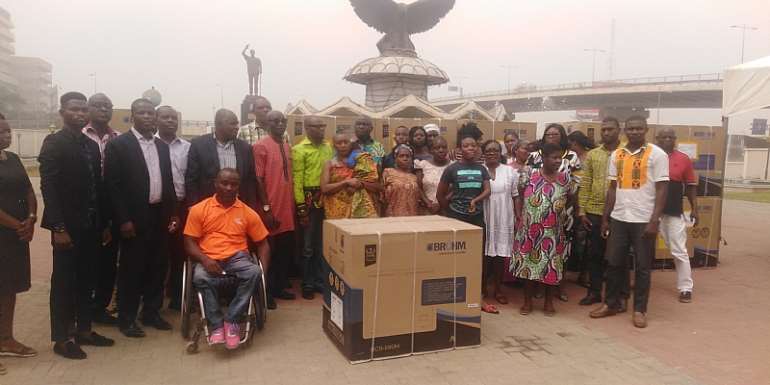 The Municipal Chief Executive (MCE) of Korle Klottey Municipal Assembly (KoKMA), Nii Adjei Tawiah has donated fridges to some persons living with disabilities as required by them to start up their own trade.

According to him, the move which is the first exercise by the Assembly will help reduce begging on the street and burden persons with disabilities bring to their families and society.

Speaking at the first distribution durbar, the MCE said "The Municipality has received its 3% percent of the Common Fund and it is appropriate, we share among our brothers and sisters with disabilities. It is not everyone that benefitted since this is the start but as time goes on, others will benefit."

He added that in as much persons with disabilities are not given much attention in society, he is happy Ghana does not follow such trend rather depend on their services from time to time.

Mr. Tawiah noted that although the Municipality is new, it has organised some training for some persons living with disabilities with the aim of exposing them to other sources of employment as well as making wealth.

The MCE also revealed that ever since the Municipality was separated from the Accra Metropolitan Assembly(AMA), it is bent on using the skills and knowledge acquired to run its new office.

He further revealed that despite its hard work, the Municipality also has lots of challenges facing it.

"The people who received the fridge are beneficiaries who have registered with the Municipality. I am not aware of the new development you are talking about but I will liase with other MCEs to ensure that persons who have benefitted here do not go to other places to benefit again depriving others of having a fair share," he stressed.

The MCE noted that the Municipality will be tracking the beneficiaries to see if they are using the items received in positive ways.

Mr. Tawiah lauded government on its initiative of supporting persons with disabilities and placing smiles on their faces.

Chairman, Ghana Federation of Persons with disabilities, Korle Klottey Municipal Assembly said "We are grateful to the master of the land. He has made it. We were under Accra Metropolitan Assembly, today, we have our freedom and are benefitting from this."

He added that the disbursement of the 3%percent of common fund among persons with disabilities go a long way to help Ghana archieve the Sustainability Development Goals (SDG)10.

He added that the PWD will be happy if Government increases the 3%percent of Common Fund to 4% or 5%percent.

He cautioned the members to make good use of the item given them.

Some beneficiaries who could not hide their joy shed tears, lauded government and assured that they will work tirelessly to make their family and society proud.

Collins Dauda is being prosecuted for Akufo-Addo's recklessl...
33 minutes ago