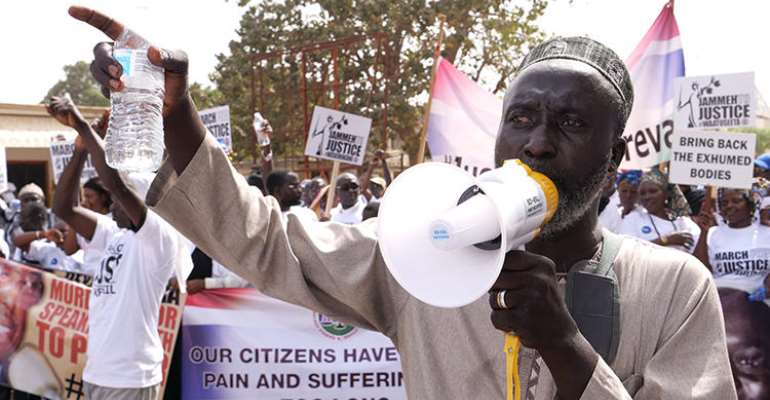 A demonstrator is seen in Banjul, Gambia, on January 25, 2020. Two radio stations were recently shut down and their staffers arrested over their coverage of the protests. (AFP/Romain Chanson)

On January 26, police raided the offices of the privately owned radio stations Home Digital FM, in Brikama, and King FM radio station, in Tallinding, and arrested several staffers, according to Home Digital FM manager Omar Fofana and Jallow, a reporter and general manager of King FM, both of whom spoke to CPJ via messaging app.

Police arrested Bojang, a reporter and CEO of Home Digital FM, during the raid and held him until January 28 at the police station, when they charged him with incitement and released him after posting a bail of 250,000 dalasi ($4,887), according to Fofana and Bojang, who spoke with CPJ via messaging app.

Police arrested Gibbi Jallow and two technicians at the station, Ebrima Jallow and Madiou Jallow, during the raid, Gibbi Jallow said. All three, who share a family name but are not related, were held in a police station until January 28, Gibbi Jallow told CPJ. He said he was charged with inciting violence and was released on the condition that he provide documents about land he owns. The technicians were released without charge, according to Kebba Kamara, a King FM reporter who spoke to CPJ via messaging app.

Both Home Digital FM and King FM had recently covered protests and interviewed activists calling for President Adama Barrow to step down this year, pursuant to a pledge he had made in 2017 to serve for only three years instead of his full five-year term, according to Bojang, Jallow, and news reports . Barrow took office in early 2017 after defeating longtime President Yahya Jammeh, whose government had a long record of press freedom violations.

The arrests and raids came after President Barrow’s executive office ordered both outlets to be suspended for allegedly violating their licenses by “demonstrating notoriety for peddling incendiary messages and allowing their media to be used as platforms for inciting violence,” according to a statement signed by Ebrima G. Sankareh, a spokesperson for the Gambian government, which CPJ reviewed.

Bojang and Mustapha K. Darboe, vice president of the Gambia Press Union, a local trade group, both told CPJ that authorities had not specified when Home Digital FM and King FM would be permitted to resume broadcasting. Jallow told CPJ that security officials had barricaded the area around his office and he could not get inside.

Jallow told CPJ he believed King FM’s coverage of the issue was fair because they also broadcast interviews with people who advocated that Barrow remain in office until the conclusion of his five-year term. On the day of the raid, King FM had only played music and had not broadcast any political coverage, Jallow said.

"Police and paramilitary officers stormed the station and said they had orders from above to shut down the station," Bojang said. During the raid, police did not explain what they meant by "orders from above," nor did they give further details on the alleged offence, Bojang and Fofana said.

During the protests against Barrow staying in office, demonstrators just outside Banjul, the capital, slapped and shoved Sankuleh Janko, a reporter with the Dakar-based regional broadcaster West African Democracy Radio, the journalist told CPJ. He said he was not seriously injured.

On January 25, Gambian authorities denied accreditation to Nicolas Haque, a correspondent with Al-Jazeera, who had applied in order to cover the protests that began on January 26, according to a tweet by Haque and news reports .