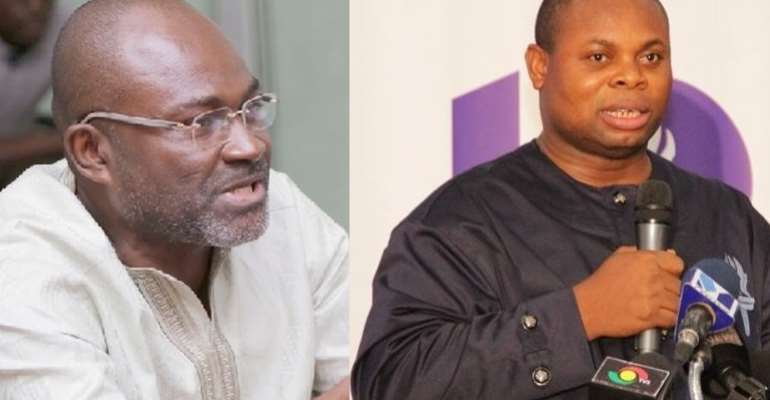 The outspoken lawmaker took Franklin Cudjoe to the cleaners as he bombarded him with unprintable words, including describing him as a dishonest person.

Mr. Agyepong explained the reason behind his anger by saying that Franklin Cudjoe, without provocation, openly insulted MPs in the country, whom he described as drunkards.

According to him, Franklin Cudjoe is a dishonest person, who usually 'sells his conscience for money' and, therefore, has no moral right to insult MPs.

The MP said he was privy to several 'dubious' deeds of Franklin Cudjoe. “If he dares me, I will expose him in public,” he added.

“Franklin Cudjoe, I know what you did in 2015 to 2016 and if you dare me, I will expose you,” he said on NET2 TV, adding “you don't work and you survive on bribes. He walks with his stomach and he has no brains. Franklin Cudjoe's dishonesty has dented the image of IMANI and this is an open secret.”

He said IMANI, notably Franklin Cudjoe, is not happy with the NPP government's refusal to pay their budget, asking “what work does IMANI do that the state should pay its budget?”

According to him, Franklin Cudjoe and his IMANI are hiding behind their so-called think tank group to amass wealth, especially at the expense of political parties and the state.

“Franklin Cudjoe and his group usually deal with the highest bidder and this dishonest and corrupt person refers to parliamentarians as drunkards,” the MP bemoaned.

Without mincing words, he informed Franklin Cudjoe that the NPP government would not give him any money so he should go ahead and do whatever he wanted or pleased him.

The MP reiterated “Franklin Cudjoe is a selfish, dishonest and corrupt person, who doesn't have Ghana at heart.” He threatened to expose him in public.