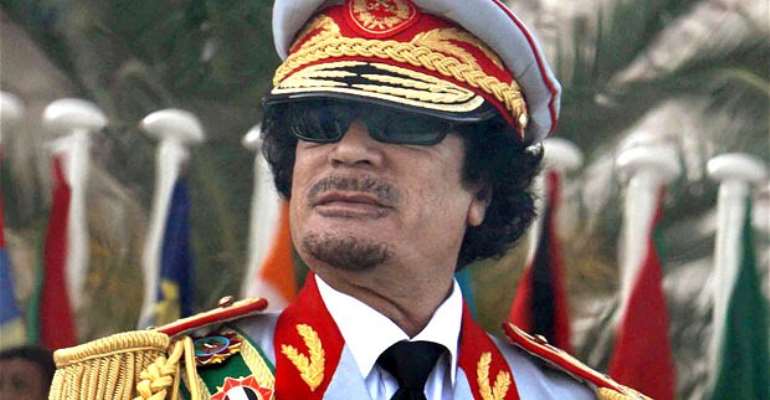 The people of Libya under Colonel Muammar Gaddafi were virtually provided with everything that makes life worth living, except that comparatively with other countries of the world, they enjoyed less democracy. Libyans under Gaddafi enjoyed free and quality medical care, free education, free electricity, free housing, marriage allowance, car allowance for all citizens, next to zero cost of fuel, free land and farming equipment for citizens that voluntarily ventured into farming etc. Libyans under Muammar Gaddafi enjoyed better quality of life than most European countries.

Insatiable as human beings are, Libyans were not content with the leadership of Muammar Gaddafi who provided them with everything they needed but restricted some of their rights. It appears though that Libyans were presented with two options; one was to accept the dictatorship of Colonel Muammar Gaddafi and enjoy quality life in peace or join the Arab Spring that fought against dictatorship in North Africa and the Middle East and embrace an uncertain future. As history and memory recalls, Libyans chose the latter and indeed the future of that country remains uncertain and at best bleak.

If I may put it bluntly, the enemies of Libya who for long have fought against their progress, in the guise of promoting good governance, became allies with some disgruntled, selfish and less patriotic Libyan power brokers whom they used to cause internal disaffection and foiled hatred for the Gaddafi regime. It was hard for them to actually perceive the real intentions of the external forces that backed them to overthrow their government. Fortunately, or unfortunately, Colonel Muammar Gaddafi was overthrown in the bloody civil war that erupted against his government and indeed, he died violently in the struggle.

It is almost a decade now since Libyans saw the back of Gaddafi, who I believe is resting in peace but Libya remains at war. Libyans are still paying for overthrowing and murdering the man that gave them everything they needed. There is no peace in Libya neither to talk of democracy. Instead of the robust economy and infrastructure that prevailed under Gaddafi, Libya now has a weak economy and a completely broken infrastructure. Social service like free and constant electricity that every ordinary Libyan enjoyed eludes even rich Libyans now. Did Libyans go, or did they come? Your answer is as good as mine.

I want my people, particularly Nalerigu-Gambaga constituency to take lessons from the Libyan experience. Some of the lessons we should learn are:

Had Libyans allowed Muammar Gaddafi to continue, they would probably have had the natural turn of events where he probably would have peacefully handed over power because he was becoming advanced in age or he would have continued as President but with the introduction of reforms to give Libyans more of the freedoms they asked for. Almost a decade has passed since the ouster of Gaddafi but Libya is only better than worse. Some of his fiercest critics have regretted and the so-called lovers of the Libyan people have soon left them to their faith. There is no functioning government today and they still don’t have democracy and rule of law. The rebels who fought Gaddafi and claimed to do so for the Libyan masses are currently busy fighting among themselves for power, long after the demise of Gaddafi. If it was possible to resurrect Colonel Muammar Gaddafi, Libyans would have done so just to hand over the country back to him.

With the knowledge of that recent history, constituents of Nalerigu-Gambaga should be guided and make no mistake in contemplating a change in leadership. Hon. Hajia Alima Mahama remains the greatest asset and political leader in the constituency. Once she has shown interest in going for a final term in parliament, I believe it is our civic responsibility to support her bid in order for her to continue to bring face-lifting developmental projects to the constituency. We cannot afford to regret like the Libyans because they didn’t have the knowledge of history that we do now. Even if they had knowledge of history, they were not guided by it; we cannot tow that path because similar consequences awaits us if we do. That being said, I remain convinced that Hon. Hajia Alima Mahama will smoothly ride back to parliament after the 2020 elections. We all know she is the best!

Savannah: NADMO to clear buildings on waterways after heavy ...
37 minutes ago