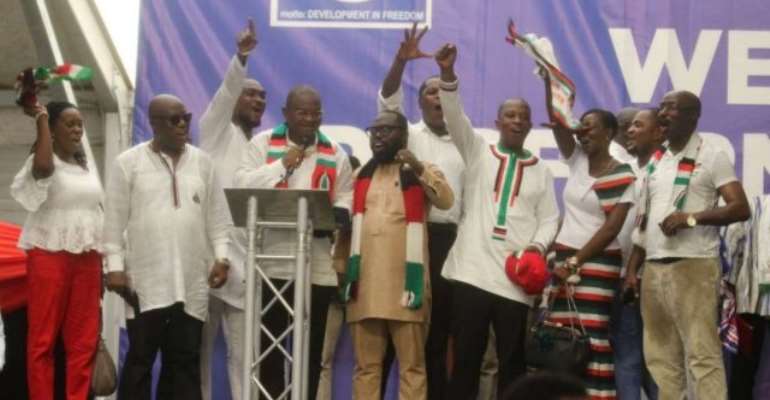 Members of the NDC at NPP's National Delegates' Conference

The National Democratic Congress (NDC) has criticised the governing New Patriotic Party for having the ‘courage’ to hold its annual delegates conference at a time when it says, many Ghanaians are going through hardship.

Speaking at the NPP’s National Delegates’ Conference at the Trade Fair Centre on Sunday, former presidential aspirant of the NDC, Sylvester Mensah highlighted a myriad of challenges, which according to him, is haunting the citizenry due to mismanagement on the part of the NPP.

“We salute the NPP for the courage to hold its national delegates conference during this Christmas season when the sentiments of the majority of Ghanaians is that of a ‘Sakora’ Christmas,” Mr Mensah.

Delivering his solidarity speech, the former Chief Executive of the National Health Insurance Authority (NHIA), however, cautioned the NPP to keep watch as the opposition NDC is poised to take the reins in the upcoming 2020 elections to alleviate the plight of Ghanaians.

“We wish you well in all your deliberations and urge you not to forget to plan your exit from government in 2020,” he added.

Sylvester Mensah also reiterated the need for peace and goodwill among political parties to ensure the development of the country.

This year’s Conference and Rally is on the theme: ‘We have performed better – 4 more to do more’