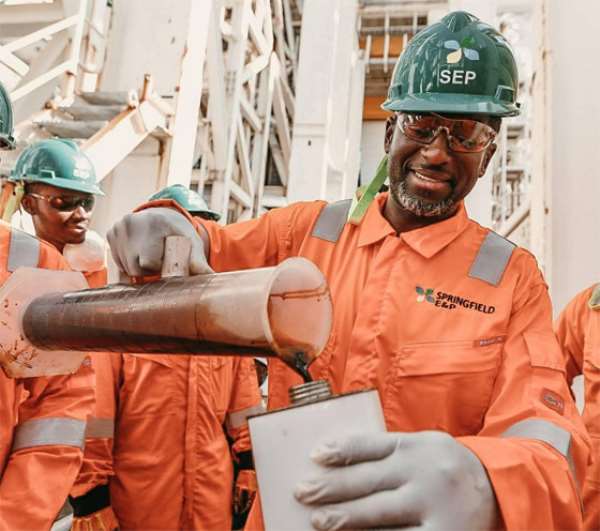 Afina-1 which is located at a water depth of 1030 metres was drilled to a total depth of 4085 metres and encountered light oil with a gross thickness of 65 metres, with 50 metres light net oil pay in good quality Cenomanian sandstones.

The secondary target in Turonian age sands was drilled at the edge of the structure and encountered 10 metres of hydrocarbon bearing sands consisting of light oil and gas.

Springfield has more than doubled its discovered oil in place volume to 1.5 billion barrels and added 0.7tcf of gas.

The current undiscovered potential of the Block is estimated at over 3 billion barrels of oil and gas in multiple leads and prospects within various proven reservoir units.

With this, Springfield has made history as the first Independent Ghanaian and African Energy Company to drill in deepwater and find hydrocarbons.

Springfield is currently the Operator and Majority Interest Holder (84%) of WCTP Block 2, with GNPC and its exploration company, EXPLORCO, holding the remaining interest.

Chief Executive Officer of Springfield, Kevin Okyere, was quoted in the release as saying “this is great news for Springfield, Ghana and Africa. We are excited about the discovery as it ties into our vision of becoming a leading African upstream player with a global focus.”

This for us means increased opportunities to impact the lives of our people positively with the resources, the release said.

Dr. K. K. Sarpong, Chief Executive of GNPC was quoted in the release as saying “as the national oil company of Ghana, GNPC is proud of this feat, chalked in this all-Ghanaian partnership.”

This achievement fits into GNPC's strategic pillars of: 'replacing and growing reserves' as well as 'enhancing sustainability through local content development…'

This discovery demonstrates once again the high prospectivity of Ghana's sedimentary basins and the Ghanaian capacity to deliver, given the opportunity.

Springfield Exploration and Production Limited was incorporated in March, 2008 to pursue exploration and production opportunities in Ghana and the West African sub region.

The process of acquiring a block began in 2012, but this was finally awarded by the Government of Ghana in March

From 2016 until now, the company has been building capacity for both upstream and downstream operations with a significant mix of experienced international industry practitioners working alongside their Ghanaian counterparts.

In April 2017 Springfield, which is a wholly-owned Ghanaian company, contracted the world's largest seismic vessel, the Ramform Titan owned by Petroleum Geo-Services (PGS) to undertake a 3D broadband seismic data acquisition on its Block.