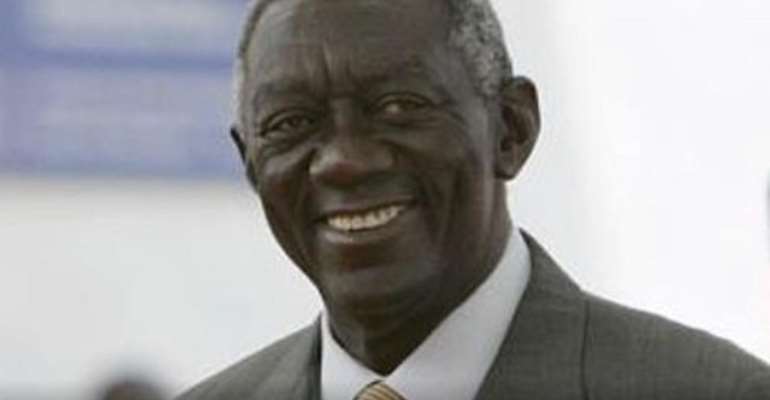 Ex- President, John Agyekum Kufuor has been honoured for his commitment to agricultural growth and development in the country.

“You did not end there after serving your country as a President. You continued to do what your parents did best - farming, which has created numerous jobs for the people,” a Citation, which was presented to the former President by the Atwima Nwabiagya North District Assembly, read.

“Although the international community has recognized these efforts, your motherland owes you this great gratitude.”

“You instituted and implemented policies that ensured the reduction of chronic hunger and poverty in the country,” it read, citing the subsidising of agro-inputs and free cocoa mass spraying.

It indicated that this had a positive impact on food security and the total overhaul of the cocoa industry.

The programme coincided with the District’s Farmers’ Day celebration at Dabaa in the Ashanti Region, hometown of the former President, who was also declared the District’s Best Farmer.

Oheneba Owusu Afriyie, Apagyahene, received the citation on behalf of the former President, as well as other prizes, including a tricycle, fertilizer, and knapsack sprayer.

The former President has cultivated over 200 acres of cocoa and other crops and more than 300 sheep and cattle, amongst others.

The Farmers’ Day celebration saw more than 15 individuals and organisations receiving awards for their dedicated services and immense contributions to agricultural productivity in the country.

Mr Benito Owusu Bio, the Member of Parliament for Atwima Nwabiagya North, and Deputy Minister of Lands and Natural Resources, said the Government would continue to prioritise agricultural development to achieve food sufficiency.

“This is why the last three years, under the Nana Akufo-Addo-led Administration, had seen massive investment in the sector and the rolling out of initiatives to create jobs and wealth for the citizenry.”

He lauded the award winners, especially the former President, for their patriotism.