Neither NPP nor NDC would win one touch - Afrobarometer report reveals 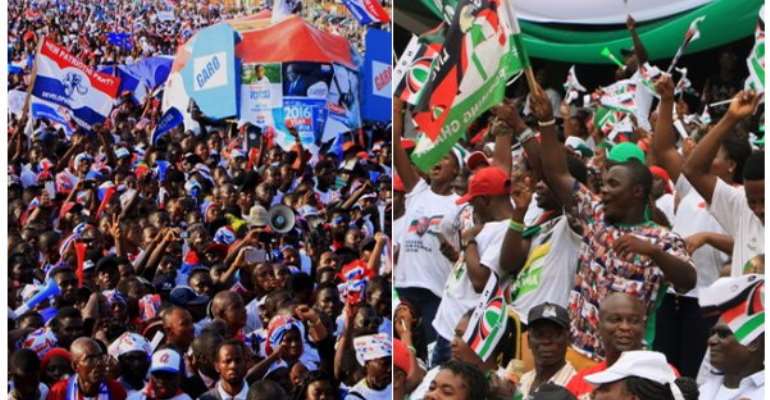 A latest Afrobarometer survey has found that neither the governing NPP nor the biggest opposition party, the NDC would secure a first-round victory should elections be held today.

This means Presidential candidates of both parties -- John Mahama for the NDC and most likely, President Nana Akufo-Addo for the NPP -- would amass just 50 per cent or less votes.

Per Article 63/3 of the Constitution, a candidate running for the highest office in Ghana should secure more than 50 per cent of valid votes cast.

However, with just 368 days to the 2020 general elections, both parties, who have alternated power since the start of the Fourth Republic, have failed to concede the report should worry them.

Reacting to the findings on Joy FM’s Top Story programme Thursday, National Communications Officer of the NDC, Sammy Gyamfi said the report is a plus for his party.

He said should the survey be the base for any analysis, it means the 2020 elections would go into a run-off.

“And you know since the start of the Fourth Republic [26 years ago] the incumbent has never won an election in a run-off,” the young lawyer said.

He is confident the Centre for Democratic Development’s (CDD) findings in the report is good news for the opposition NDC, stressing their own polls have shown that the NDC would emerge victorious.

Meanwhile, Information Minister, Kojo Oppong Nkrumah also insisted the government has nothing to worry about.

He demanded that the full report be released for perusal.

According to him, polls being conducted by the governing party show come December 2020, they would retain power in one round of voting.

He, however, expressed delight with the findings of the Afrobarometer thus far, insisting they are good for the government.

Part of the latest report shows, for instance, that although no party would get the necessary 50 per cent plus one vote, the NPP is closer to doing so with a significant margin between them and the NDC.

Mr. Oppong Nkrumah said other aspects of the Afrobarometer report which shows a low level of trust in opposition parties is god news for the administration.