The Uganda Political Giant, Some Now Conveniently Call A Mole 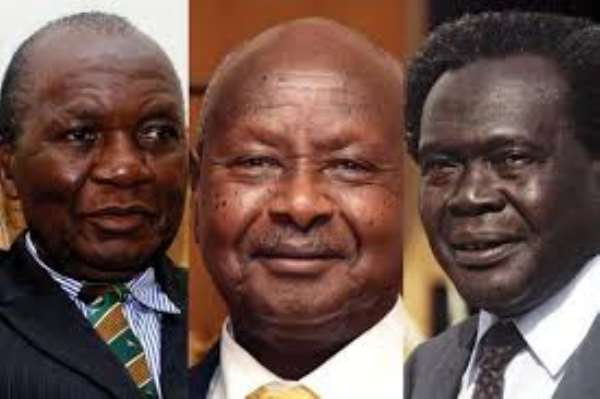 Since time immemorial, political lovers have looked to politicians' biographies to help discern what the politicians they are supporting might mean. Politics, particularly sloganeering, street speeches and songs, can be difficult to connect to ideas, events or policies--to aspects of culture and society considered beyond the confines of popularism. Rightly or wrongly, we use the writings of Daniel Kalinaki, in his book, 'Kiiza Besigye and Uganda's Unfinished Revolution, to project larger meanings of what Kiiza Besigye stands for, and how. or when he fell out with President Museveni. Followers and critics turn to Besigye's life for clues, and that book is a first-rate introduction geared to the general public.

It was only in 2001 that Besigye's political career officially began to attract public attention, but things had happened before, and those within NRM already knew that he was going to end up in opposition. Before the 1996 presidential elections, Besigye had already started the 'divorce' proceedings against Museveni and NRM. While working as the National Political Commissar(NPC), in June 1990, he received a letter from Prime Minister, Dr. Samson Kiseka, directing him to proceed to Bombo for Military training. The intention was to get him away from the Movement secretariat. In his absence, Boloki Chango Macho was appointed as acting NPC. Shortly after Besigye had finished his course, Museveni announced a cabinet reshuffle in which Eria Kategeya was appointed as NPC substantially. Basically, Besigye was, technically, out of cabinet, and lets us also note that he was only NPC for only two years, but his opponents make a big deal out of it, such that they can make someone think that Besigye designed and baked NRM into a monster it is today.

The trust issues between Museveni and Besigye continued, even after being appointed the commander of the Mechanised Brigade in Masaka. Personally, I believe there are very few men in the world who would trust a colleague who, rightly or wrongly, takes one's former girlfriend as his wife. Winnie Byanyima, who is now Besigye's wife, was Museveni's girlfriend.

When Besigye was, later, elected among the 10 army representatives, he asked for leave from the army to concentrate on CA, and he had no intention of going back in the army. Him, Tinyefunza and Sserwanga Lwanga continued to oppose Museveni on several issues during the CA, in particular, NRM's extension as a system of government.

From the beginning of his emergence from obscurity in the 1990s when he wrote that famous document against NRM, Besigye confronted disdain and skepticism. In the many waves of reinterpretation of his achievements, Besigye's status as a businessman and presidential candidate has been held against him. In 1996, he bought a large piece of land in Kasangati, Kampala, from some old man. He then set up a piggery, to start making money outside government, but you will find people twisting this, too, to fit in their anti-Besigye propaganda- that he stole tax payer's money.

During the 1996 elections, Winnie Byanyima was on Museveni's campaign team, but Besigye wasn't, because, apparently, she preferred Museveni to Ssemogerere. While campaigning in Rukingiri, Museveni was told by local leaders that without Besigye, he may not win there. He knew Besigye couldn't campaign for him, but he also knew that Besigye was still a soldier in the army. So, he sent out a message on the army radio ordering Besigye to report to Rukungiri without fail within 24 hours. Winnie reportedly laughed at him when the order reached Besigye, because the later had,earlier on, discouraged Winnie from campaigning for Museveni. Charles Rwomushana,with due respect, and a few others, have written a lot of stuff indicating that Besigye ordered soldiers to beat up Ssemogerere's people in Rukungiri, but there's no evidence backing up their claims. Otherwise, Ssemogerere wouldn't have backed him up, later, before the 2001 elections. It was an easy decision for Ssemogerere because he saw a man capable of changing things, and he has not, really, disappointed.

These circumstances readily account for Besigye as a staunch advocate of a democratic culture. The irony in this is that some people still use his past ties to Museveni to portray him as some kind of 'managed' opposition by Museveni. He has written ideas that he believes evoke a national politicality among our citizenry. He is not interested in simply impressing donors or other politicians. He believes that political power matters--that it influences our sense of past and present and can shape our sense of community and existential purpose. Yet without a healthy store of serious research and persuasive scholarly writing, a lot of Ugandans in their 20s are writing a lot of unchecked garbage about him.