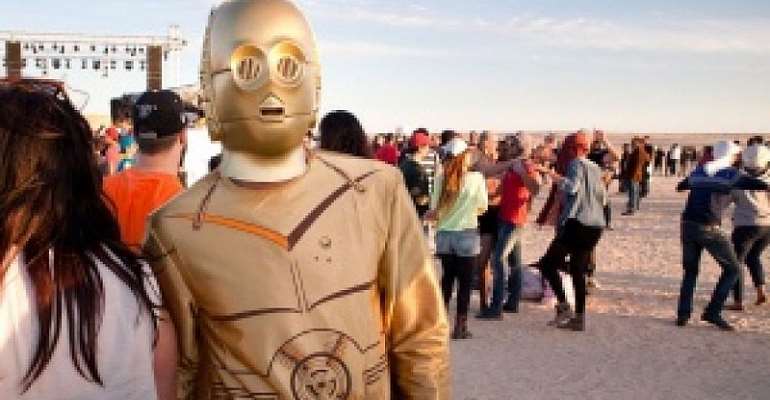 Thousands descended upon the southern Tunisian desert, home of the original Star Wars set, for a two-day electronic music festival to dance and listen to 30 hours straight of tunes.

Nicknamed the 'Les Dunes Electroniques', or the Electronic Dunes, the two-day festival near the Algerian border, drew in fans and DJs on Saturday and Sunday in the Tozeur region of the Sahara desert.

With its proximity to the Algerian border and open space in the desert, and with fears of jihadist attacks on tourists following 2015, this year's festival has been heavily policed.

The festival was first launched in 2014, but was put on hold following the deadly attacks.

Tourism in Tunisia
Tourism makes up about seven percent of Tunisia's GDP, was left reeling after the 2015 attacks.

But that sector has since come back with improved security and an expected total of nine million people visiting the small Mediterranean country this year say industry officials.

This festival in particular was organised by a Franco-Tunisian hotelier with backing from the Tunisian tourism industry.

Festival
With 30 hours of non-stop electronic music from across the globe, including traditional Tunisian beats, the festival is expected to have brought in some six thousand people.

20 musicians were also brought in to make the stage, the desert, a perfect place for concert-goers to take in the beauty of the Sahara while dancing all night.

Speaking to AFP was Melissa Fleury, a 22-year old who travelled from France.

"I adore such festivals in France but here in the desert and in the midst of this landscape it is magical," said Melissa Fleury.

Star Wars theme
The Tozeur region of the southwest Tunisia served as the set for Anakin Skywalker's village Mos Espa in the famed Star Wars films and also for the English Patient.

In fact many of the locations from the set remain there, but abandoned.

Despite the festival being dedicated to music, the theme was Star Wars, and many came it out in full force to keep that vibe going strong.