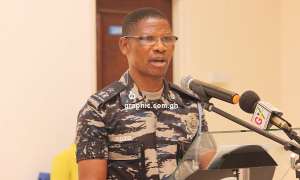 Coup historians - professional and amateur, would have reason to scratch their heads over the NPP Government management of arrests in the alleged plans to destabilize the government.

The core accusation against those arrested first in September 2019 was that they belonged to a Whatsapp discussion group formed as a front for recruitment to destabilize the Government, and had plans to stage a demonstration at the seat of Government and sack the Government in the process. See

Some say the arrests were reactive as in true and caught in the act; others say proactive, as in warning off those thinking of destabilizing the Government or using social media tools in destabilizing ways; and not a small number believe it was simply a ploy to distract public attention from Government failings.

Since the early civilian arrests in September, some military personnel and now police personnel have been added to the incarcerated list, interviewed and released or remanded. In this latter category are: The Director-General of Police in charge of Research and Planning, COP Nathan Kofi Boakye; Superintendent Peter Lanchene Tuubo, ex-Executive Secretary to former Inspector-General of Police David Asante-Apeatu and who currently is NDC Opposition parliamentary candidate for Wa West Constituency in the 2020 elections; ex-Director of the Transformation Office of the Ghana Police Service ACP Dr Benjamin Agordzor. Those are senior Police officers indeed, with professional and personal followings within the Police service.

And now the Information Minister Kojo Oppong Nkrumah tells us a number of military officers have been interrogated or are under interrogation and there is a “high possibility” that they too would be charged.

The piecemeal, incremental and what may appear as ad hoc and on the run manner of arrests and interrogation, often preceded by accurate “speculation” by media close to the Government, add to public anxiety and apprehension over the security situation in Ghana

The Government appears not to have learned lessons from the last coups in 79 and 81. In both coups, it was the Government of the day that provided the oxygen of publicity on which the coup plotters rode to success. Namely, the May 1979 attempted coup trial of Rawlings gave him the opportunity to publicly announce his “socialist manifesto” to the Ghanaian masses who then supported the subsequent June 4 coup of that year. And the December 1981 coup that arose from the incompetent management of the security threat posed by Rawlings and his cadres through mass sacking of the June 4 coup remnants in the military and security forces as well as the hilarious but dangerous in the public gaze attempts on the lives of Rawlings and Tsikata and molestation of other June 4 leaders who had declined to be relocated from Ghana post June 4.

From the Government management of the arrests so far, the following suggestions are in order

- Avoid politicizing the arrests, avoid running public commentaries by Government spokespersons, and avoid leakage and briefings to sympathetic press that give the impression the Government is making up its case as she goes along.

Leave the matter to the lawyers representing the plaintiff and the defendants to communicate with the public - at least they would be restrained by, or will have regard to, professional ethical considerations

In liberal democracies of the West, it is unheard of that a Government would be involved in running commentaries on processes, the progress of investigations and the merits of bringing charges in serious criminal cases such as terrorism. So apart from giving public assurances here and there, commentaries are left to the prosecutors – the police doing the investigations and gathering evidence and the lawyers prosecuting the accused in court. Accused persons in such serious cases are taken to and from the court in secure vans without them coming into contact with the public or the media after court appearances, and without opportunity, for them to inflame or prejudice their cases by their public pronouncements.

Containment of activities of foreign diplomatic missions in Ghana

Without exception, military coups in Ghana have involved facilitation by or active involvement of foreign interests using their diplomatic missions in Ghana. And by “without exception”, I include the less obvious successful/unsuccessful ones like Arthur and Yeboah’s operation guitar boy attempted coup of April 1967, the General Akuffo Palace coup of July 1978 and the Rawlings attempted coup of May 1979.

There is the view that foreign diplomatic missions in Ghana operate and interact too freely with the public, including public officials, and engage Ghanaians in initiatives without any form of accountability to the government of the day. Some of the engagements are social and semi-official under the impunity of diplomatic cover that becomes a means of cultivating a local network of informants and enforcers, advertently or inadvertently undermining governments and government policies.

Most Western countries impose and insist on compliance with, strict rules on activities of diplomats on their soil. Some of these rules relate to whom they can or cannot interact with, and strict confinement to what is considered purely diplomatic activities. In some countries such as Russia and China some of these restrictions can be paranoid and ridiculous, often calibrated to fluctuations in diplomatic relations.

In the scheme of things Ghana is a paradise for foreign diplomats. But let us not let the adulation of our traditional hospitality enter our heads and open all doors in our usually obliging manner. In these security tenuous and challenging times and given past connections between foreign interests and coups, the government must actively monitor activities of diplomats and their locally engaged staff in Ghana

Every security expert, including those who think they are, knows that a major potential security threat to Ghana is spill over of the conflict in BF, or the displacement of people from BF, to the North of our country; or else opportunists using human resource in the BF conflict to pursue nefarious activities in Ghana.

Most other countries in that situation would take a keener interest in the resolution of BF conflict. Certainly in my opinion the conflict cannot be resolved by military means alone, which appears to be currently the predominant approach of choice.

There are various elements in the BF conflict that cannot be put down to Islamist terrorism, even if some of the parties rely on Islamist terrorists. They include ethnic or communal rivalries and disputes over all manner of things and, as the Economist puts it, “many are fighting for farmland or against government corruption but adopt the 'jihadist' label because they happen to be Muslim". The varied elements in the BF conflict provide Ghana with various entry points for diplomatic engagement in helping to contain the conflict.

Recent developments in the BF conflict as in the last month are not comforting.

On 26 September there was a High-Level Meeting of the UN Peacebuilding Commission on “Prevention and Peace building in Burkina Faso” at the 74th session of the UN General Assembly. See

To date, within 6 weeks of that meeting, the following:

Report says about 20 killed in attack in Soum province, latest in spate of violence blamed on armed groups at https://www.aljazeera.com/news/2019/10/killed-attack-burkina-faso-gold-site-191006082526446.html

Gunmen entered a mosque in northern Salmossi village and opened fire on the worshippers, say media reports at https://www.aljazeera.com/news/2019/10/dozen-killed-burkina-faso-mosque-attack-191012193112330.html

Five security officers killed and 11 others injured in twin attacks on army bases in northern Burkina Faso at https://www.aljazeera.com/news/2019/10/soldiers-killed-burkina-faso-attacks-191019201815688.html

Security sources say the death toll is expected as there is a large number of people still unaccounted for at https://www.aljazeera.com/news/2019/11/burkina-faso-37-killed-attack-canadian-mining-convoy-191106225055900.html