“Free SHS Ambassador” In Our Classrooms? 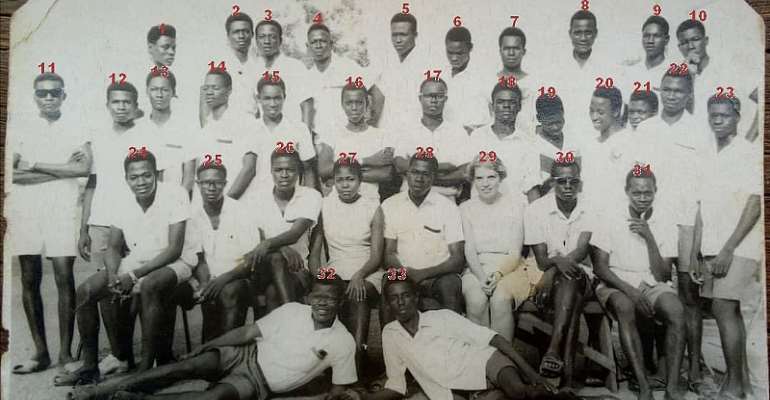 Our classrooms as political battlegrounds. Is that where it has got to?

It was pretty straightforward for people of my generation – born a few years to the end of the colonial period and coming of age in the post-colonial period.

At age eight or so, you started school in Primary 1. Six years later you gained automatic entrance into Middle School where you could either sit for the Common Entrance Examination to go into Secondary School or you went on to complete the four years to earn the Middle School Leaving Certificate (MLSC), which could get you into Teacher Training or some secretarial jobs...

Should you succeed in your Common Entrance Examination, you proceeded to Secondary School where in five years, you were ready to write the Ordinary Level (O Level) Examinations, which depending on your “Grades”, would qualify you or not to do the 2 years Sixth Form and the Advanced Level (A Level) Examinations for entry into University. Fairly straightforward

There was a mixed bag funding regime for that level of education in Ghana involving Government Scholarships, Local Councils and of course guardians. Some of the very best educated minds were products of that period.

1960 t0 ’65 was a period of massive government investment in secondary school education infrastructure with the Government Educational Trust (GET) schools. I joined the Trust in 1965 with admission into Navrongo Secondary School (Navasco), after primary and middle schools in Yendi and Tamale.

My Navasco days were my halcyon years and I revere the memory of those days. School meant school, and nothing else. You had no adult worries and definitely politics never cropped up. In brief: We had very bright and well aerated classrooms, we were well fed, we had a wide variety of sporting activities, we had well stocked libraries, our science students had up to date labs, in our case at Navasco, we had school uniforms including school belts, T-Shirts and sandals and more, , but above all, we had dedicated teachers who assured quality education!

I remember spending hours in the school library pouring over encyclopaedia, magazines and books. Ghanaian teachers were not very common in those days and I had my education almost exclusively at the hands of British and American teachers. From form one to upper six, my headmasters were Scotsmen starting from Robin Crawford (from Achimota), 1965, to James Ramsay to Colin MacDonald, 1972, when I left for university.

It was a period of new ideas: A year before the coup of 1966, which toppled the government of our founding father, Osagyefo Dr. Kwame Nkrumah, secondary education had been reduced by one year from five to four years so I entered at Form 2! This was reversed after the coup and we went back to our Form 1! One of the pioneering schools, Navasco, old mathematics (Euclidean?) was replaced with Joint School Project (JSP) Maths and Latin was dropped and replaced with German…

It was also the period we saw the introduction of General Science and Additional General Science to consolidate the study of Biology, Chemistry and Physics…Mathematics and English were compulsory throughout and failing in one of them would deny you a Grade one no matter how good your subjects were.

The system served us well and delivered our post-independence required human resources to service our developmental needs. Or…?

I cannot quite put my finger, nor can anyone else, on when it became a matter of national concern to bemoan our fallen/falling educational standards but as we approached the closing years of the 20th Century, it had assumed national emergency proportions. There was some tinkering with the introduction of the JSS/SSS and later JHS/SHS systems, but these were more grudging than fundamental reforms as politicians grappled with their versions on how to fix the system: The JSS/SSS system, NDC and the JHS/JHS, NPP. Both systems kept feeding into our university system poor quality material who came out eventually, as, well, graduates with very low academic or professional abilities leading to the introduction of another phrase to describe the direness of the situation: Unemployable Graduates. Indeed, we even currently have an unflattering Association of Unemployed Graduates haunting the job market. Sure, unemployment can come out of an underperforming economy as obtains in almost all the neo-colonial economies of the world, but unemployable is not the same as unemployed.

Paradoxically, we have witnessed in the last two decades the growth of the educational sector with the establishment of more institutions, from the crèche level to post-graduate level but we still hear of the falling/fallen standards…

Some university teachers, friends of mine, have told me how they mark the English, alongside the core subjects they taught. Why am I feigning surprise? As a former newspaper editor, I suffered agonizing moments trying to make sense of manuscripts!

We were all agreed on the source/cause of the problem: Poor quality Secondary/High School preparation, especially, in state-owned schools. Even the big hitters were also slipping… Numeracy, literacy and comprehension had become quite problematic.

My generation was a government school conveyor belt system but our quality was the same or better than the high flying private schools of today. We had quality! Though I attended Navasco, far away from the big hitters of Achimota, Mfantsipim, Adisadel, et al down South, I grew up being able to hold myself against the products of those schools!!! No wonder, some of my best and beloved friends today are products of those schools.

Once I was among some Achimota friends chatting merrily away and one of them who had been away from our shores and did not know me, turned and asked me which year group I belonged to. Many voices responded for me and the gentleman ungraciously said I was an imposter! Of course it was a term of endearment here and we all laughed it away! That is the power of quality education – you can blend in anywhere.

So, after the tinkering that brought in the SS and HS systems and did away with O and A levels, another cat was recently thrown into the chicken coop: Free SHS. Come on, who does not like freebies? Free SHS, is being touted as the saviour of our educational system. On that one, as the saying goes, the jury is out there but for now, it is no good news. This particular freebie, mass production for our universities did not come with any guarantee of quality!

It started off as a vote buying caper and may have contributed in that direction, but has now gone beyond political gimmickry and assumed the potential of a national calamity: No classrooms, no dormitories, no nutritious meals, no libraries, no textbooks, no laboratories, no technical workshops, no teachers with enough expertise in many fields, even places of convenience are not available – a terrible state of affairs which once elicited the sarcasm and flippancy of no other person than the minister of education!

Some parents have decided to look elsewhere (private tuition) for their children’s future…This is one freebie gone sour! In trying to stem the chaos, brought on by this political point scoring caper, Ghana’s education authorities have been compelled to come up with all sorts of palliatives, with none guaranteeing quality. The colour-coded track system has only added to the confusion with its potential of causing a bottleneck in the not too distant future…How the universities would cope with the backlog has become a matter of “when we get to the bridge…”

But even as we trudge perilously that way, clear signs of desperation have crept in. Though the Ghana Education Service (GES) has disclaimed it, the appearance of an “SHS Ambassador” on a school compound using Free SHS to canvass for Nana Addo-Dankwa Akuffo-Addo in the lead up to next year’s elections (only 1 year and 2 months away) signals the political battlegrounds our school compounds are going to be turned into and the complete destruction of the academic integrity of our schools. The GES disclaimer to what in effect is a politically motivated pilot project, leaves many questions unanswered and one can only await the investigations promised.

It is an ill will blowing across the education landscape which we may yet pay dearly for before long: Battalions of unemployable youth!

And in closing, where is FCUBE, Free Compulsory Universal Basic Education? Is that not where the resources should be pumped to catch them young? This is one freebie with a mission and vision. The jury on the other one would be out for a long, long time…The desperation of the Free SHS Ambassador, is the harbinger of that grim future…