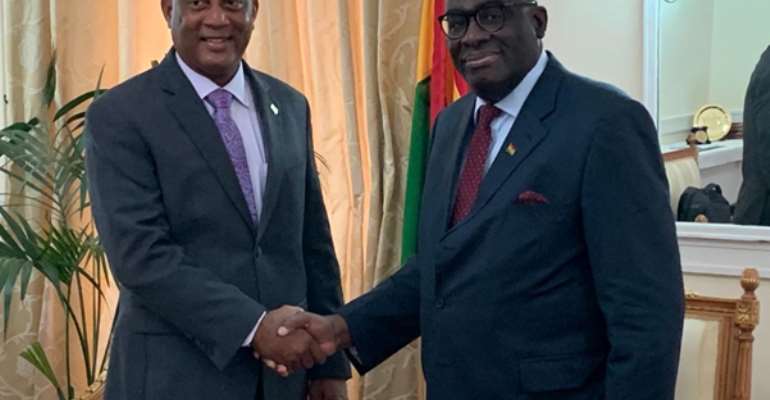 H.E Papa Owusu-Ankomah Welcoming The Deputy Prime Minister Of The British Virgin Islands To His Office.

The Deputy Premier indicated the Virgin Island’s intention to, among others, strengthen its political, economic and cultural ties with Ghana in particular, and Africa generally and in line with that objective, an Africa Trade Mission is being considered and Ghana will be in the spotlight due to the “Year of Return” which has been effectively championed by the President of Ghana.

The economy of the British Virgin Islands is fuelled by tourism and financial services, and these areas, the Deputy Prime Minister suggested, could form formidable areas for collaboration between Ghana and the BVI especially as the population of the Islands is mainly of African descent. Honourable Vincent Wheatley disclosed that the BVI’s current Attorney General is a Ghanaian-Baba Aziz and welcomed the idea of the establishment of a visa-free regime between the two countries.

On his part, H.E Papa Owusu-Ankomah expressed his pleasure at the idea of a visa-free regime, emphasising Ghana’s role as the host of the African Diaspora globally. He agreed with the Premier that the two countries could forge a mutually beneficial relationship, especially in the financial sector, as Ghanaian seeks to become the financial hub of Africa.

H.E Papa Owusu-Ankomah welcoming the Deputy Prime Minister of the British Virgin Islands to his office.