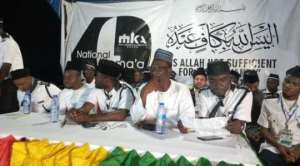 Alhaji Suleman Anderson, a Deputy Ameer of the Ahmadiyya Muslim Mission, Ghana, has asked the Islamic faithful to uphold the values of truthfulness and tolerance, and the willpower to live by the true teachings of Islam.

Merely registering to become a full member of any religious sect, he said, did not automatically provide the convert with the certificate to become a “true believer” of God.

Muslims who classified themselves as true believers of God must, therefore, be in readiness to obey and work fully with divine laws and laid down principles governing their religion at all times.

Alhaji Anderson was speaking at the closing of a three-day annual youth conference of the Mission for the Southern Sector at Gomoa-Pomadze in the Central Region at the weekend.

He recounted instances where God stood firmly behind and saved the lives of leaders of the Mission who proved to the Creator that they were really true believers of God during their lifetime.

He counselled the youth in the sect, to avoid unbridled lust for material wealth and to stay away from ‘Sakawa’- internet scam, something that would lead them astray.

They should always strive to embrace and follow the genuine teachings of their leaders.

Alhaji Anderson said that was the way forward to make their lives meaningful to themselves and the society.

They should become good example to others, to help attract more young people to join the Mission.

He applauded leaders of the Mission for their untiring efforts at ensuring its steady growth – expand its membership.

He saluted all those who contributed useful ideas and suggestions which ensured the successful creation of the Ahmadiyya Mission, Ghana, into two sectors, the Northern and the Southern Sectors.

He expressed optimism that, this would enable members of both sectors to attend annual conferences in their numbers, since they would not have to travel long distances.

Alhaji Anderson also expressed the Mission’s deepest appreciation to leaders of Ahmadiyya Muslim Mission in Cote d’Ivoire, Mali and Nigeria for sending delegations to the conference.

The delegations from Cote-d’Ivoire, Mali and Nigeria, had earlier taken turns to extend fraternal greetings their Ghanaian counterparts.

Youth groups from Volta, Greater Accra, Eastern, Central and the Western Regions, constituting the Southern Sector of the Mission attended the three-day conference.

Hard-working branch leaders were given citations for their contribution towards the development of the Mission.

More than 800 pints of blood was donated to the National Blood Bank by youth during the conference.