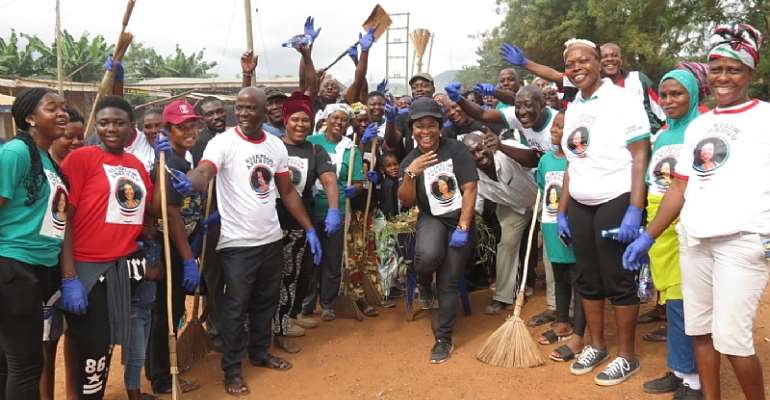 The Abokobi Ward of the opposition National Democratic Congress (NDC) in the Dome Kwabenya Constituency has held a massive clean-up exercise in Abokobi, in the Ga East Municipality as part of efforts to deepen sanitation consciousness.

The prime object of the exercise was to sanitize the area and to further help impact positively on the lives of residents in order to prevent diseases.

The event which was held on Saturday recorded a huge turnout in the area with a display of youthful enthusiasm throughout the period of the sanitation campaign.

The Parliamentary Candidate for the NDC in the Dome-Kwabenya Constituency, Faustina Elikplim Akurugu, disclosed that the exercise is to help create awareness that sanitation is essential in the lives of every Ghanaian and therefore it is always prudent to keep your surroundings clean.

She added that the exercise is a symbol to tell the NPP in the Constituency that, the NDC is ready to clean the mess they have caused in Dome-Kwabenya for the past 16 years.

According to her, the seat had been gifted to the NPP for the past 16 years without any better development.

"We all know the numerous challenges confronting us in this constituency. What has accounted for the persistence of these challenges is the failure of leadership. It is as if there is no Member of Parliament respecting the Dome-Kwabenya constituency", she said.

According to her the incumbent MP, Hon. Adjoa Safo has only been able to asphalt the road in front of her house leaving all the deplorable roads in the constituency to the detriment of motorists.

Madam Elikplim highlighted her efforts towards building harmony within the Dome-Kwabenya constituency and also her likable personal as a woman of the common people.

She noted that the NPP government has nothing good to show except the untold hardships they have brought upon Ghanaians including the communication tax which she described as very bad.

She also called on the government to immediately withdraw the introduction of the Comprehensive Sexuality Education (CSE) in our basic schools. According to her, CSE is of no use to the Ghanaian Child.

She, therefore, called on members and supporters of the NDC to rally behind her to retrieve the seat from the incumbent NPP MP, to continue the development and transformation agenda of the former president John Dramami Mahama.

She also encouraged constituents to participate fully in the upcoming Assembly Elections in order to choose competent Assembly Members to represent their respective Electoral Areas at the Local Government level.

The Chairman of the Abokobi Ward for the NDC, Mr. Jerry Yao Ayima also known as Papa Jay revealed that the clean-up exercise was part of the party’s aims in educating the public on sanitation.