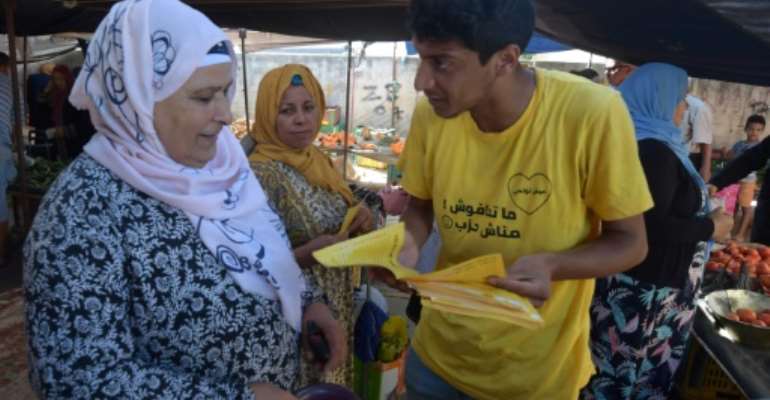 Aich Tounsi is campaiging to win over Tunisian voters fed up with political elites. By FETHI BELAID (AFP)

With punching bags for "beating corruption" and clowns to yellow-card the system, an independent Tunisian "anti-party" has launched an unusual campaign to win over voters fed up with political elites.

Its name is Aich Tounsi, which means "Live the Tunisian Way", and this young civil society movement -- which put on sports and cultural events before moving into politics -- hopes to enter parliament after October 6 elections.

"We are different from classic political parties. We will give up immunity and all other parliamentary privileges," Ghazi Mrabet, candidate for Ariana district, told AFP.

Faced with a sceptical grocer, the lawyer and human rights activist insisted: "We are new. None of us have participated in government. There are no representatives from political parties among us."

Unconvinced, the trader replied that he would have liked Aich Tounsi to continue defending the rights of Tunisians as a social movement, rather than participating in elections and becoming "like the others".

The national mood is currently against mainstream political parties. In the first round of presidential elections on September 15, candidates from the ruling parties were beaten by two political outsiders. 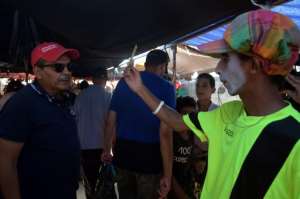 Many observers expect this dynamic to continue into parliamentary elections, which could benefit independent lists -- or parties that can establish reformist credentials.

For Mrabet, "Tunisians need a breath of fresh air and new faces".

"For about a year, Aich Tounsi has been saying that political parties have failed, that politicians have stolen from and violated Tunisia through a system based on corruption, patronage and cronyism," he added.

Aich Tounsi was founded in April 2018 by Olfa Terras, an entrepreneur known for her philanthropy. With her husband, she launched the Rambourg Foundation to fund film, sports tournaments and cultural spaces in Tunisia.

Her spouse Guillaume Rambourg is a former financier, known in French media for his financial support for French President Emmanuel Macron's election campaign. 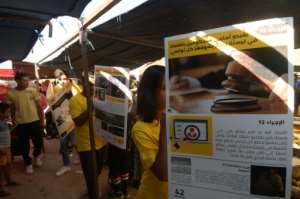 The party promises to fight corruption, guarantee equal opportunities, and to improve socio-economic conditions for Tunisians. By FETHI BELAID (AFP)

To draw up its "road map", Aich Tounsi says it carried out a "national consultation" that involved contacting 415,000 Tunisians by telephone.

Its programme promises to fight corruption, guarantee equal opportunities, and to improve socio-economic conditions for Tunisians.

This approach is winning support, one analyst said.

Moreover, "they have important financial means that allowed them to organise cultural events that attracted a lot of young people, and the attention of the media, which helped present Aich Tounsi to a wider public."

Other movements have also canvassed the country presenting themselves as alternatives to established parties, including media mogul Nabil Karoui's Qalb Tounes.

Karoui advanced to the second round of the presidential elections, despite being detained in a money-laundering probe.

For Jourchi, these movements "have benefited from the political vacuum created by the ruling class" to "win over numerous Tunisians."