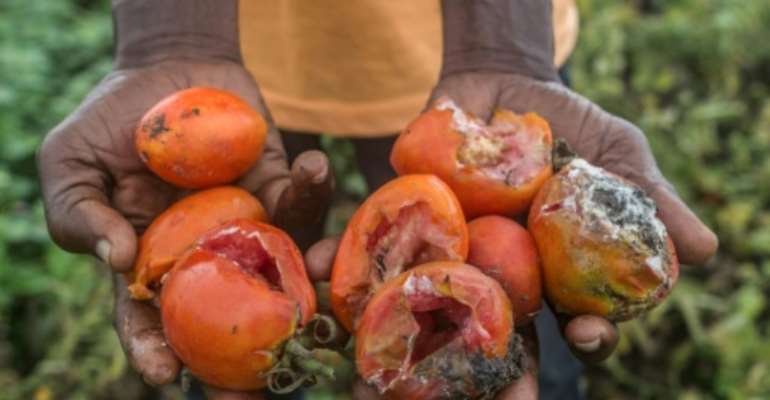 Left to rot: Part of a tomato harvest that a Benin farmer had grown for sale in Nigeria. By Yannick FOLY (AFP)

Dozens of baskets brimming with newly-picked tomatoes gently rot in the sticky heat, becoming the latest casualty in a bout of trade tension between Benin and Nigeria.

On August 19, President Muhammadu Buhari unexpectedly closed Nigeria's borders to goods trade with Benin and Niger, declaring the time had come to end rampant smuggling from those countries.

In Benin, Nigeria's neighbour to the west, traders say the impact has been devastating.

"This is a distressing sight," Agriculture Minister Gaston Dossouhoui said this month, visiting markets in the town of Grand Popo, one of the main agricultural communities of southern Benin.

"It's very difficult for our producers. It's a disaster."

"Financially speaking, Benin's small producers are under water -- they've already had to run up millions (of CFA francs) in debt," said Adjeoda Amoussou, head of Benin's Chamber of Agriculture.

Buhari defended the closure by saying Benin and Niger -- Nigeria's neighbour to the northeast -- had failed to police their borders properly, and chronic smuggling was the result.

"The borders will remain closed until our neighbours control what goes through the borders and comply with the laws," warned Hameed Ali, comptroller general of the Nigeria Customs Service.

The move immediately caused a shockwave. 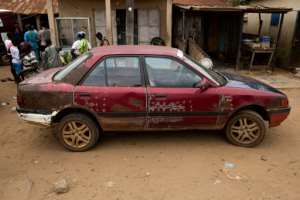 Cross-border: A car used for transporting goods from Benin to Nigeria. By Benson IBEABUCHI (AFP)

Unilateral border closures go against all commercial and freedom of movement treaties signed under the Economic Community of West African States (ECOWAS).

The announcement also cast a shadow over a historic free-trade agreement, signed by 54 out of 55 African countries, that reached a key operational threshold just five weeks earlier.

Nigeria, as well as Benin, had signed onto the pact on the eve of the landmark day -- a move hailed as a crucial push towards ending the continent's trade barriers.

That smuggling goes on is clear, although it goes in both directions.

Huge quantities of frozen chickens, rice, fabric and cars arrive at the port of Cotonou, Benin's economic capital, where they are taxed locally before being routed -- often illegally -- to Nigeria.

Benin has few functioning petrol stations, and its fuel is far more expensive than in Nigeria, where it is subsidised by the state. A common sight is smuggled Nigerian petrol, sold by the side of the road in jerrycans.

Beyond contraband, though, trade with Nigeria is crucial for Benin and Niger.

Ranking among the world's poorest countries, they find themselves as David opposite the Nigerian Goliath -- a market of 190 million and Africa's biggest economy.

In Benin, business people in some parts of the economy are panicking, and unfounded rumours that Nigeria will even go so far as to cut off its electricity supply are spreading in local newspapers.

"Buhari and his country want to put an end to us," said Barthelemy Agon, a pineapple producer. He like many others have been hard-hit by fruits and vegetables no longer being exported to their big neighbour.

As for taxi and truck drivers, it's barely worth the effort to hit the road since a litre of imported contraband fuel has risen by about one euro ($1.10) since the frontier was closed. 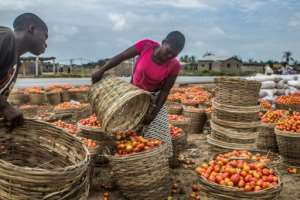 Workers at a roadside in Grand-Popo fill baskets with unwanted tomatoes. By Yannick FOLY (AFP)

"We are suffering seriously from this situation -- without petrol we can't do anything," said Aristide Samson Assogba, a motorcycle taxi driver.

Sebastien Deguenonvo in Cotonou's Casse-Auto district said sales of his low-quality diesel had slumped from at least 30 26-litre (six-gallon) cans per day to just 10.

"I beg the Nigerian president to have pity on us," he said.

But if his stoney reputation is anything to go by, Buhari -- an ex-general whose first spell as Nigeria's leader, in the 1980s, came after a coup -- is unlikely to be merciful.

"President Buhari should be a little bit afraid of God," said Henry Assogba from the National Association of Petrol Sellers. "The big one cannot live without the little one."