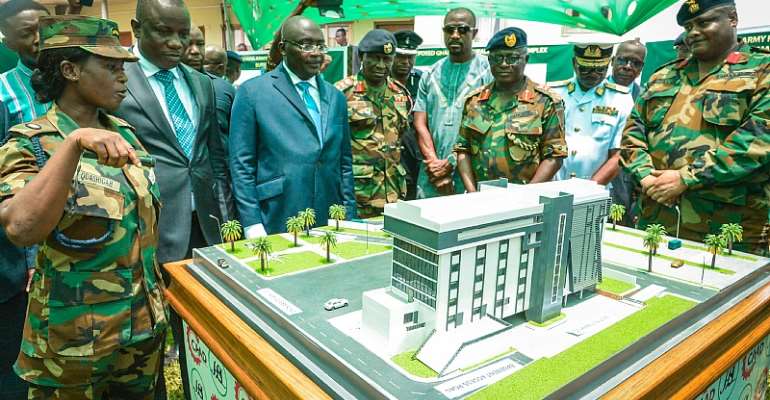 The Vice President of the Republic, Dr Mahamudu Bawumia, has cut sod for construction to begin on a new Ghana Army Headquarters Complex at Burma Camp in Accra.

The Vice President has also commissioned the new Army Headquarters Annex at Burma Camp, as part of activities marking the 2019 Army Week celebration.

The new edifice, named Odartey-Wellington Block after the late Major General Neville Alexander Odartey-Wellington, who was the Army Commander from 1978 to 1979, has 37 offices, 3 conference rooms, an Armoury and a Kitchen.

Speaking after a colourful parade by the officers, men and women of the Ghana Army at the 48 Engineers Regiment, Teshie, Accra on Friday 27th September, 2019, Vice President Bawumia lauded the “very professional attitude” of the Ghana Army, which has seen the outfit continue to defend the nation against internal and external aggression.

Commending the men and women of the Ghana Army for their sterling performance both within and outside Ghana’s borders, Vice President Bawumia pledged Government’s continued support to the Ghana Army and the other security agencies to enable them discharge their duties effectively.

“It is clear that given the needed resources, our Army is ready to give of their best, holding nothing back, to make our country and themselves proud…. I wish to assure you that the Government would continue to work closely with the Military High Command to ensure that your logistics and operational needs including equipment, clothing and accommodation are adequately met and on time for both your internal and external operations. I can assure you the Ghana Army would receive its fair share of the support being provided by the Government to the Ghana Armed Forces.”

The Vice President called for greater collaboration between the security agencies, pointing out that the Army’s “support to the other Security Agencies as part of your internal operations has brought about sanity in most of the trouble spots across the country.

Calling for increased vigilance in the face of terrorist threats in neighbouring countries, Vice President Bawumia indicated that while Government is putting in place measures to effectively deal with such threats, it is important that the security agencies “redouble your intelligence gathering efforts and sharpen our readiness in order not to be taken by surprise.”

“The Government on its part would do all within its means to ensure that you get the necessary training and logistics required to carry out your counter terrorism operations,” he added.