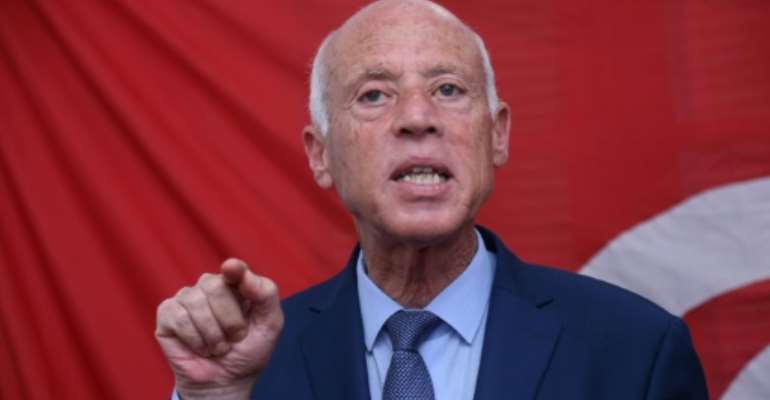 Political neophyte Saied garnered more than 37 percent of the votes among 18 to 25 year olds in the first round of the Tunisian presidential election. By ANIS MILI (AFP/File)

At the political science faculty where Tunisian presidential candidate Kais Saied taught law, a devoted following of young voters swayed by his campaign propelled the political novice to the second round.

Now they are determined to help him to victory in next month's run-off against fellow outsider, populist media mogul Nabil Karoui.

"Many young people voted in his favour because they wanted to revolt against the system, to say that we can take things into our own hands," said Balkis, a 19-year-old student at the faculty near the capital Tunis where Saied taught constitutional law until recently.

According to a poll by Sigma Conseil institute, Saied garnered more than 37 percent of the votes among 18 to 25 year olds, after a grassroots campaign organised by young volunteers.

Saied's surprise victory in the first round was "an new youth revolution: a ballot box revolution," said Balkis.

While admitting she did not vote for him in the first round, having not seen him as a "statesman", she said she had "no doubt of his integrity, his modesty and his respect for everyone".

For Ghofrane Bejaoui, 20, there was no question of her support for Saied.

"Of course I voted for him. He is the best candidate, respectful and above all very honest," she said.

Saied "is very respected and has a very good reputation in this faculty," said Sana Ben Nomane, a professor of public law and former colleague of Saied's.

"You hear nothing but good things about him."

Despite a stern appearance, rigid self-presentation and speech -- earning him the nickname "Robocop" -- former students and colleagues described Saied as a considerate teacher, who did not hesitate to support all his students.

While Saied drew young people to the polls, many others abstained in a vote that only saw 49 percent turnout, according to the electoral commission ISIE.

Ibtihel Kahla, 20, did not vote in the first round, believing that any "honest" candidate would not stand a chance of winning.

But, surprised by Saied's victory, she now says she will "not miss the next round of the presidential election and will vote for Kais Saied".

For Mourad, another student, "young people have the right to exclude the old system and look for a new alternative."

Both Saied and his second round opponent Karoui are political outsiders who drew on "anti-system" sentiment in Tunisia, spurred by exasperation with high unemployment, a rising cost of living and failing public services.

Karoui, a media mogul and founder of a TV channel, is contesting the election from behind bars where he has been awaiting trial on money-laundering charges since August 23.

Many on campus said they were not surprised by the youth support for Saied.

"You know why? It's because there is currently a campaign aimed at undermining this man and accusing him of being a Salafist, a fundamentalist, which is totally false," said an administrative official from another Tunisian faculty on condition of anonymity.

In response, he said, "There will be a mobilisation to push the maximum number of young people to vote for him."

Moness Bkara, another former student of Saied's, was convinced of this.

"Attempts to undermine him will only improve his chances in the second round. He will be the future president of Tunisia and that makes me truly proud," she said.

Young campaigners behind Saied have already flexed their mobilisation muscles.

On Tuesday, they launched a campaign to boycott the Elhiwar Ettounsi TV channel, which they said was slighting their candidate.

The channel lost almost one million followers from its Facebook page in a single day as a result, according to Tunisian media reports.

"Bravo, you have massacred us on Facebook. You are truly strong."