Why Not Ghana Beyond Corruption? 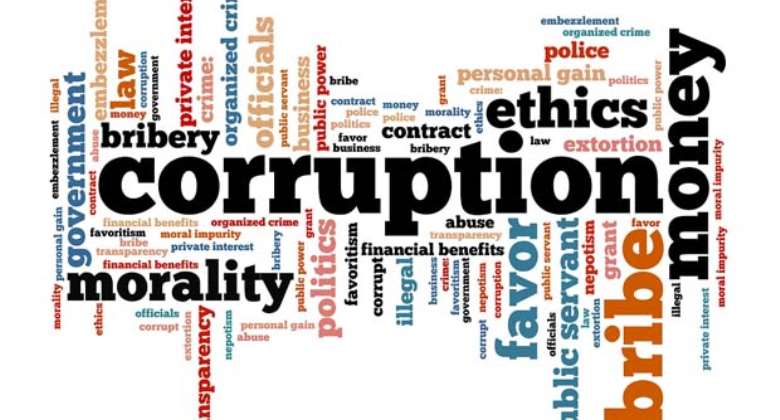 “Good question,” that was what I murmured to myself after I watched the viral video in which the above question was asked.

It was the Netherlands Ambassador to Ghana, Ron Strikker who has suggested that just as Ghana has a policy tagged “Ghana Beyond Aid,” we should do same for Corruption.

The Ambassador who was speaking at Ghana Integrity Initiative’s 20th Anniversary stated: “your [Ghana’s] official policy is Ghana Beyond Aid; why not Ghana Beyond Corruption? Corruption is a very bad thing that companies suffer and will stay away if they think they are going to be harassed by corruption in a certain country.”

It is uncommon for Foreign Diplomats to do what he did and for the Ambassador to risk to do it means he is very much concerned just as Ghanaians about the acute nature corruption has assumed under President Akufo Addo.

Ron Strikker deserves tonnes of commendation for his courage to suggest this to the clueless, inept and ‘tibonko’ Akufo Addo regime, notwithstanding the fact that he won’t listen.

As for the disgraceful and hypocritical thing the Speaker of our Parliament, Prof Mike Ocquaye did in condemning the Ambassador for making a laudable suggestion for the betterment of our country, the least said about it the better. I never believed the near-Octogenarian will do this. It is the reason Ghana is still in this sorry state. We hate the truth as Ron stated.

NDC Communication Team Member, Bernard Anim Piesie had likened the daily rate of the scandals and corruption out-break to a relay race where the racers with baton are trying to outdo one another.

Meanwhile, here was Nana Akufo Addo who as an opposition leader and in his desperate attempt to win power made all manner of promises to the people.

“I can also assure you that as your President, I will NOT condone corruption in my government. I bring to the table and to the Office of President of this great country an unblemished track record of personal integrity and fortitude. I invite you to bank on my essential leadership attributes and make me your president. I will lead a strong fight against corruption in this country.” Candidate Akufo Addo posted on his Facebook wall in October 10, 2012 and repeated it in 2016.

He in 2016 added other things including using the “Anas Principle” to fight corruption and that he was prepared to transform Ghana in only 18 months because Ghana already has the resources, that we wouldn’t need to borrow, begging the people to try him too as a President.

It is so shameful that President Akufo Addo who promised to use ‘Anas Principle’ to fight corruption is himself now requesting investigation into the very ‘Anas Principle’ whereas the agents of the principle – Anas and his assistants have become endangered species, being hunted; Ahmed Hussein Suale’s head was demanded on live TV till he was killed for exposing corruption, Starr fm reporter, Edward Adeti’s life had remained in danger for exposing an Akufo Addo’s Minister, Rockson Bukari and others over corruption.

Whilst the corruption cases outbreak is on and the life of anti-corruption Journalists are being threatened, the President who more than begged the people for his mandate chose to protect his offending appointees, earning him the unenviable title, the Clearing Agent General, CAG.

A typical example is how he handled the Australia Visa scandal. Managing Editor of the Crusading Guide Newspaper, Abdul Malik Kweku Baako on Joy Fm’s News file program read copiously portions of the Youth and Sports Minister’s report on the Visa scandal to the President in which Kwadwo Baah Agyamang, National Sports Authority [NSA] Chairman had admitted to adding 5 names to the fraudulent list but as we speak, he is still at post just as Pius ‘Ananias’ Hadzide, the Visa contractor.

Also, Ken Agyapong is on record to have said any investor seeking to see President Akufo Addo had to pay $20,000 as appointment fee at the Presidency, which had not been denied.

Kwesi Nyantakyi who is President Akufo Addo’s friend and financier was caught on Tiger Eye tape saying the President’s blood brother, Bumpty is in charge of demanding 5% of any government contract that is given, meant to repay Akufo Addo’s indebtedness over elections.

Other cases such as the Ghana Cylinder Manufacturing Company [GCMC], where the Finance Officer blew the cover of the Managing Director, MD, Frances Essiam for circumventing procurement laws. The GCMC Board sanctioned the MD but that was quickly reversed and the Board and the whistle blower were rather sacked. The MD is still in office.

The GCMC situation is not markedly different from the National Youth Authority case where the Deputy CEOs who were sacked alongside the unqualified CEO for circumventing procurement laws had expressed sadness for not being treated as whistle blowers whereas the sector Minister, Isaac Asiamah who knew and presided over the criminalities is untouched.

Same Isaac Asiamah contrary to the recommendations of the Justice Dzamefe Commission conveyed about 400 party supporters to 2019 AFCON in Egypt and spent heavily on them, this is aside the $4.5million he wasted at the tourney.

I have said only President Akufo Addo knew why he brought back suspicious Adjei Boateng Adjenin as Public Procurement Authority [PPA] CEO after he as Chief Manager at Ghana Water Company was implicated in fraudulent deals by the Justice NYB Adade Committee.

When seasoned Procurement experts tell us there is nothing like savings on procurement and that it is a ruse, Nana Akufo Addo is at it, unsuccessfully mentioning a dubious procurement savings figures AB Adjei handed him.

Unsurprisingly, President himself set the stage for corruption during his inauguration where he stole speeches to deliver without acknowledgement. Proceeded to appoint about 65 of his associates into government; arguably becoming the nepotistic government in world history.

While at that, he told us all his appointees had declared their assets only for CHRAJ to reveal that his Cousin and Finance Minister, Ken Ofori Attah had not fully disclosed his assets.

Former Ghana Integrity Initiative [GII] head, Vitus Azeem, who could not hold it any longer says “the Akufo Addo government is the most corrupt in the 4th republic” and that “the things that are coming out are very unfortunate and should not be happening. It is a bizzare situation that President Akufo Addo must wake up to address, that is if he has any clue and stop the rhetoric and lip service, it had become more than stale.

Leading NPP member, Dr Nyahoe Tamakloe in 2016 says if elected as President, Nana Akufo Addo cannot pull any trick and that he will be a disaster. Here we are!