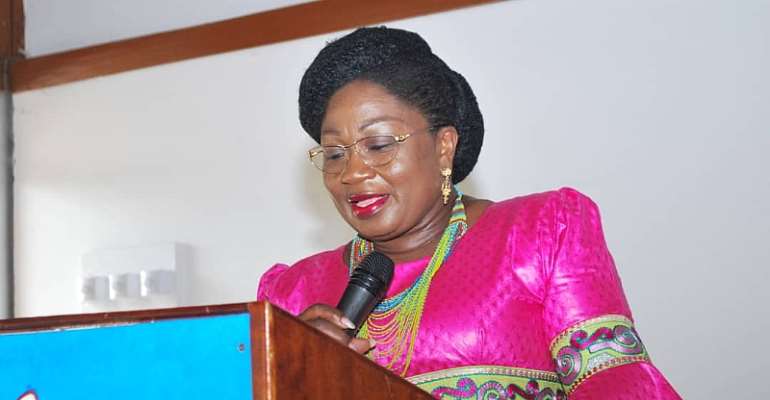 Deputy Minister of the Ministry of Environment, Science, Technology and Innovation (MESTI) and Leader of Ghana’s delegation to the 14th Session of the Conference of the Parties (COP14) Mrs. Patricia Appiagyei believes that the fight on Desertification and Land Restoration across the African continent is on a very slow pace.

According to her, the fight against climate change which is mainly attributed to man-made activities is not limited to a particular country but rather it cut across borders hence the need for enormous investments to combat it.

The Leader of Ghana’s delegation is confident that adequate mobilization of financial resources through country contributions will help in this fight as a means of capitalisation for the implementation of programmes in the short and medium-term.

“The SDGs are a shared agenda. This means that the level of engagement with varied representatives will determine the extent to which we make progress. It will depend on how well we all Africa, the private sector, the public sector, and development partners engage to address our shared vision on Climate Change and Adapted Land Use” she told the reporter.

She revealed that 50% of Ghana's total land area is under the threat of desertification but she was quick to add that Government of Ghana had established 192, 253, 19 acres of tree plantation and recently employed over 20,000 youth to plant about 10 million tree seedlings with the aim of reducing global warming.

Mrs. Patricia Appiagyei hopes that a joint commitment will be made to mobilize technical and financial resources, from the public and private sectors through win-win partnerships, recognising that private sector investment is vital in creating green jobs and wealth along the Wall and ultimately achieving the 2030 vision.

“This meeting is to exchange views on a myriad of opportunities the region offers, with an emphasis on sustainable value chains, renewable energy, and rural entrepreneurship,” she said.

The Leader of Ghana’s delegation emphasized that land rehabilitation is one of the single most impactful ways to tackle the climate emergency; we need to capatilize on the growing political momentum behind initiatives such as the Great Green Wall” she said.

“The projected impacts of climate change include decreased livestock productivity due to heat stress and changing distributions of pests and diseases; a redistribution of the potential catch of marine fisheries away from tropical countries, which poses the risk of reduced production, income, employment and, hence, food security; and a loss of forest cover, which will both contribute to further climate change and threaten the livelihoods of communities dependent on forest resources” she stressed.

She points out that “A comprehensive investment package is needed to address general challenges posed by climates such as investment in agricultural research, water management, marketing infrastructure, investments in irrigation, water-use management and improved soil management as part of a strategy for addressing climate change”.

On his part, Member of parliament for Nhyiaeso Constituency in the Ashanti Region and Member of Ghana’s delegation Mr. Kennedy Kwasi Kankam believes that its time we walk the talk on Desertification and Land Restoration.

The Member of Parliament explains that it is human efforts that will undo the damage and improve the habitats. “This situation requires a strong political decision, which in turn requires great solidarity and frank international collaboration” he revealed.

He added “Our meeting here now is to ensure that this happens” he emphasized. I think the one-man; one tree agenda is achievable and must be secondhand by African’s. “It's not that we don't have enough money in Africa, maybe governments alone can't do enough but if we work together with the private sector we can make gains” he added.

“We are fast running out of time to build our resilience to climate change and achieve all other Sustainable Development Goals” he whispered.

The 14th Session of the Conference of the Parties to United Nations Convention to Combat Desertification brought together representatives from the African Union Commission, Government Ministers including those from countries participating in the Pan African Agency for the Great Green Wall Initiative; Prime Minister’s, Heads of COP Delegation from UNCCD parties, the UN, IGOs, regional actors; private sector stakeholders; civil society organisations and Great Green Wall Champions