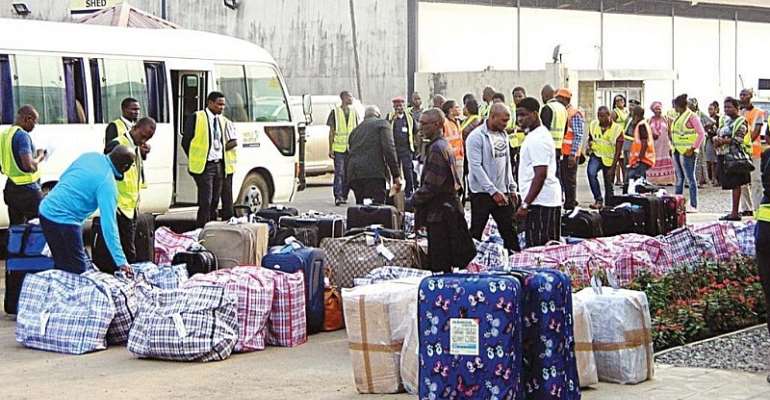 The first flight transporting 189 Nigerians fleeing violence in South Africa has landed in Lagos, despite charges by Abuja that Pretoria had tried to frustrate the operation.

The returnees disembarked the plane, some punching the air and singing the Nigerian national anthem while others waved pictures of their shops burnt down in Johannesburg and surrounding suburbs during last week's deadly attacks on foreign-owned businesses and properties.

“I'm bleeding because I was forced to leave my Cameroonian wife and a young daughter behind,” Victor Uche told journalists at the Murtala Muhammed International Airport.

“A lot of Nigerians are still stranded as they could not return with their properties,” said another returnee, who comes from Abia State, quoted by Punch newspaper.

Aliu Saheed, from Osun State, who claims his shop was burgled, told newsmen that even if he came back empty-handed, he was happy and had no plans to go back.

“It's not xenophobia because others who have fairer skin don't get the same treatment as black Africans," says Manir Ben Ali, chief editor of the Abuja-based Daily Trust newspaper.

Ben Ali attributes the rise of what he calls "Afrophobia" to “the frustration by ordinary black South Africans who haven't seen any improvement in their condition since the end of apartheid.

“They take out their frustrations on the relatively successful Africans who have small businesses and who they think are responsible for their own failures and the problems they are living with,” he says.

'Let my people go'
More than 600 Nigerians are expected to be flown back home under the repatriation operation.

But according to Punch, the number of Nigerians that made it back to Nigeria was drastically reduced following moves by the South African government to frustrate the evacuation efforts.

The flight was delayed for 15 hours due to the decision by Johannesburg authorities to subject them to additional passport and visa checks.

The head of the federal government agency who travelled to Lagos to welcome her compatriots home, promised them financial support so they can restart their lives.

Dabiri-Erewa announced that the package would include N10,000 (around 25 euros) for transport back to their hometowns, N40,000 worth of airtime (for two months) and government guaranteed loans from the Bank of Industry, to help them start small businesses.

Ostentatious lifestyle of Nigerians
The undue display of wealth by some Nigerians may explain the deep hatred towards black foreigners in some South African neighbourhoods, says Chief Gani Adams, the Aare Ona Kakanfo, or tribal leader of Yorubaland.

“They buy champagne worth millions of naira and pour it on their heads while the citizens of South Africa are struggling to buy a bottle of beer,” the controversial Aare claimed in a recent interview published by Punch and Daily Post.