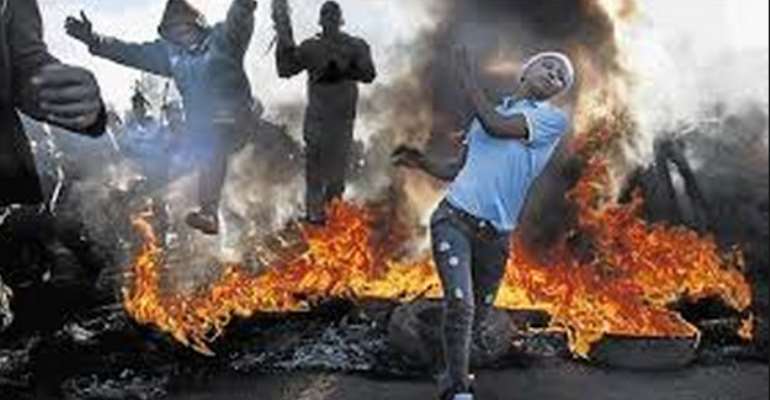 The day that Black Africa sunk low, enwrapping the entire black Africans in shame, was when the Black South Africans went on rampage; callously setting ablaze some black continental African foreigners residing in South Africa. Our fellow black Africans of South African origin, heartlessly without least shame, and devoid of any least memorable recognition of how their fellow continental Africans stood shoulder to shoulder with them, in their struggle to overcome the denigrating apartheid imposed on them by the Afrikaans, have turned to burn alive in broad daylight the very people who fought their corner.

The black South Africans, have sooner forgotten the sacrifices made by their fellow black Africans from continental Africa to finally ensure their liberation from the dehumanising segregation, thus, banishment from some areas and cities in their own African country on their own God-endowed African soil. What a contradiction to the saying, "do not bite the hand that fed or feeds you", the disgusting attitude by these overreacting psychopath nationalists or simply put, unfeeling criminals!

I don't blame the South African youngsters hilariously gone on rampage, demonstrating their bestiality through infliction of wanton murder on fellow blacks from Nigeria, Angola and other African countries, much as I will blame their corrupt, incompetent, unintelligent and ungrateful leaders who were witnesses to the great sacrifices made by other black African countries in support of their fight against apartheid.

While the supposedly jobless South Africans took the laws into their hands killing other African nationals within their midst, their police officers present at the scenes of genocide were doing practically nothing to stop them. As silence means consent, it will be taken that the police did consent to what their fellow dimwits were doing.

Their leaders were also doing nothing to stop them. It took them a while to come out to condemn the inhuman murderous behaviour by that section of South Africans who relished in their brutal killings of some innocent or otherwise, fellow black Africans from other African nations.

The corruption that has become the trait of the African leaders; gluttonously stealing from their countries to enrich themselves, depriving their nations of the needed funds to develop the nations to create jobs for their people, is the number cause of jobless on the continent to give rise to the infatuation with lawlessness as seen happen in South Africa and other parts of Africa. As they steal the money, they then keep a blind eye to whatever lawless embarkations by their citizens as long as it gives them a reprieve from the visitation of the people's anger on them. If it were not so, the irresponsible leaders in South Africa, would have acted quick enough to stop the heinous murder inflicted on the Nigerian and the other African countries nationals in South Africa by the South African hooligans.

The consequences of the "Black on Black crimes" as seen happened in South Africa are reprisals, international condemnations and the mockery of black Africans as being incapable of managing themselves and their countries. The Nigerians did not hesitate to respond in kind to the wicked murder of their nationals and the destruction of their assets in South Africa at the hands of fellow black South Africans. They also burnt down some South African stores in Nigeria in addition to killing some of the nationals of South Africa living in Nigeria. This act of "tit for tat" which is like a fair exchange not being considered as a robbery, is not genial but who do we blame? Is this tit for tat not reducing the population of Africa and resulting in the destruction of our much needed avenues of jobs and properties?

Are we not being mocked as uncivilized race of people if we should behave so callously towards one another? Could the President of South Africa, His Excellency Matamela Cyril Ramaphosa and his supporting bunch of wicked leaders like the South Africa High Commissioner to Ghana, Lulu Xingwana, not have rather ordered the African foreigners out of their country rather than silently watching while they were murdered? Ms Lulu Xingwana is such a disgrace to mother Africa by her statements made in aftermath of the massacre of African foreigners in South Africa. She says that other African leaders had better create jobs for their nationals to avoid them trooping to South Africa to look for jobs as South Africa has not enough jobs for their own citizens and these African foreigners. She does not seem to sympathise with those murdered at all. How wicked this woman could be!

Even if the Nigerians were actively doing their allegedly internationally-renowned-for swindling and other criminal activities, the people had no right to burn them alive but to order them out of their country. However, they were not killed for this reason but they are simply unwanted in South Africa because they have come to take over the few jobs available for South African nationals. What a load of nonsense!

Are South Africans not all over the world? Does it mean that in the countries where they are found and working they must be lynched for taking over the host nationals' jobs? In the United Kingdom, the USA, France or say Europe as a whole, Australia and Canada, South Africans abound, whether they are Afrikaans, black or yellow, and they are working. If enough jobs have been created for them as stupidly the uncivilized view of their High Commissioner to Ghana, why should they travel outside their country in search of jobs?

If the late Nigerian music legend, Sonny Okosun, were alive today, he would surely make changes to the lyrics of his song "Fire in Soweto" . Now his own Nigerian citizens are rather burning at the hands of those he rallied behind, fought and canvassed for their freedom from the South African whites (Afrikaans) who were treating them worse than subhuman, and restricting their movements in their own ancestral place of birth.

https://www.youtube.com/watch?v=jStnzbH1eRs
CONCLUSION:
African leaders must be proactive rather than being reactive. They must stop embezzling state funds and assets to rather use the money so often stolen, to develop their nations for the collective interests of their people to avoid their nationals trooping to other nations only to end up being killed or mistreated as often seen take place in the Gulf States and South Africa. The citizens of African nations must hold their respective leaders accountable for their failings to live up to expectations. We have to cease our stupidity of selling our conscience to corrupt political parties for a pittance.

We have to stop our love of tribalism, nepotism and short-sightedness when it comes to electing our leaders through the ballot box. Until we learn to elect leaders on merit, what we have seen happen in South Africa is just the tip of the iceberg. Other worse things may happen.

Africans need education to be able to read the small prints that form the stealing urge and tricks in our leaders to be able to detect any looming catastrophe in advance. Subsequently, as knowledge is power as said by many but to me knowledge makes one more confident, I invite all Ghanaians to avail themselves of the benefits of the Free Senior High School educational policy implemented in Ghana.

Can you have a larger platform to share or express your views without having had formal education? No!

Finally, let us understand that Africa can only develop to our satisfaction if African leaders would be guided by the principles of meritocracy, pragmatism and honesty in their governance. Once again, it is our "all hands on deck" duty to hold our leaders squarely accountable to ensure that they govern in the best interest of the people but not in their self-serving interest to avoid the repetitions of what has sadly happened in South Africa to African nationals with its concomitant reprisals.