By NDC UK and Ireland Chapter 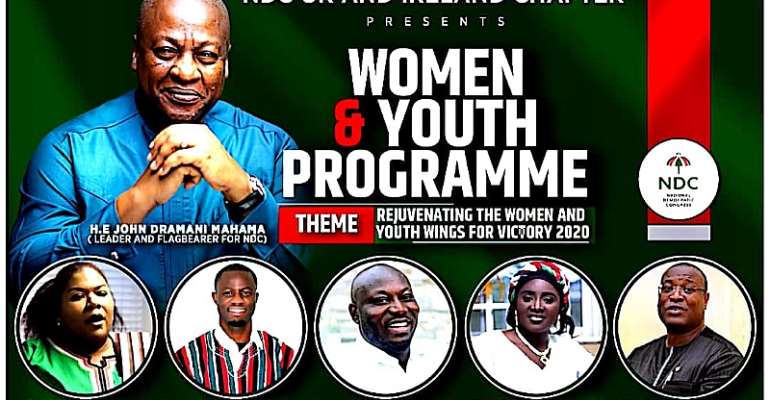 *NDC UK and Ireland Chapter Women and Youth Wings express appreciation to members for attending conference in London on 31 August, 2019*

The Women and Youth wings held a joint conference on 31 August, 2019 to rejuvenate the Women and youth fronts for election 2020.

The program was attended by women and youth from all the branches in the UK and Ireland as well as sympathisers and supporters of the umbrella family.

A representation of the Women wing of the party from Ghana attended the program. Honourable Agnes Agyei, Bono Regional Women Organiser together with two constituency Women Organisers delivered their messages to the conference.

Honourable Agnes Agyei reiterated the need for the two wings to work very hard to win more political souls for the party and make victory 2020 a landslide for the NDC.

On his part, the International Relations director of the party and former chairman of the Chapter Honourable Alex Segbefia said he can smell power coming to the NDC in election 2020.

He said the corruption, insecurity, plain thievery, deception, ineptitude of the government can only produce nothing but victory for the NDC.

He said Ghanaians are shocked and disappointed about what is happening in Ghana under Akufo Addo day.

He said politics is a game of numbers and that the party needs to expand its base in the UK and Ireland particularly in the face of ROPAA which the government is desperately seeking to implement with the hope that it might save them from the defeat awaiting them in 2020.

The Chapter Women Organiser, Madam Mary Gardiner in a speech encouraged members to unite for victory and the women to bring in more women to join the party. She emphasised the important role of women in every facet of society which make them indispensable in the political struggle to redeem our country from corruption and the mismanagement of Akufo Addo and the NPP.

The Chapter Youth Organiser Mr. Alfred Freddy Kotogbor also challenged the youth to take interest in the politics back home because they are the future leaders and the new hope of the nation.

The Chairman of the South London branch of the Chapter who is also the Counsellor for Greenwich, Chairman, Counsellor Mbang gave a historical account of the Labour Party and the commonalities between the NDC and the Labour Party.

The event ended with lots of interaction among members.