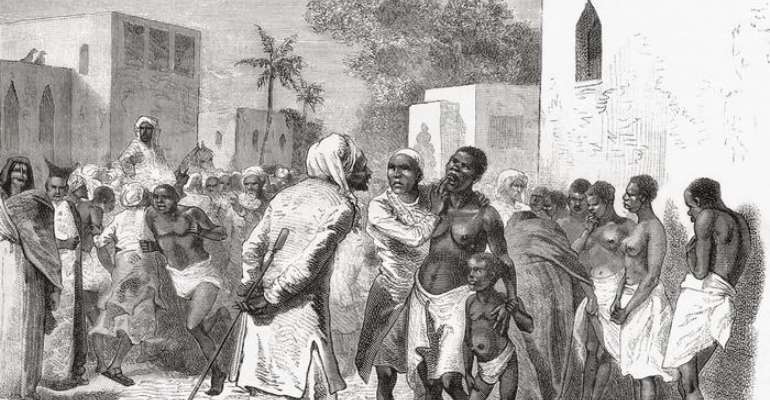 A slave market in Zanzibar, on a depiction from 1878

Through the Sahara or across the Indian Ocean, countless East Africans were sold over many centuries by Arab Muslims to the Near and Middle East. But too little is said about this, experts say.

Today Zanzibar is considered the preferred destination of East Africa: white sandy beaches, crystal clear water and hotels that give tourists from all over the world a vacation to dream about.

Long forgotten is the dark past that overshadowed paradise 200 years ago. At that time, the archipelago, which today is a semi-autonomous part of Tanzania, was regarded as the center of the East African slave trade. Here, in addition to valuable raw materials such as ivory and coveted cloves, there was one thing above all on the colorful markets: hundreds of slaves.

From Eastern Europe to North Africa

The sale of African slaves can be traced back to antiquity. It became routine in the seventh century of our era, when Islam gained strength in North Africa - seven centuries before Europeans explored the continent, ten centuries before West Africans were sold across the Atlantic to America. Even then, Arab Muslims in North and East Africa sold captured Africans to the Near and Middle East. There they worked as field workers, teachers or harem guards, which is why the castration of male slaves was common practice. Muslims, on the other hand, including African Muslims, were not allowed to be enslaved according to Islamic legal views.

"First the Arab Muslims in Eastern and Central Europe took white slaves to sell them to Arabia," explains Senegalese author Tidiane N'Diaye in an interview. "But the growing military power of Europe put an end to Islamic expansion, and now that there was a shortage of slaves, Arab Muslims were looking massively to black Africa.

Slavery is no new concept in Africa

"Slavery existed in practically all civilizations," N'Diaye explains. This was also the case in Africa before settlers came from outside: In central East Africa, ethnic groups such as the Yao, Makua and Marava warred against each other, and entire peoples within the continent traded with people they had captured through wars. Thus Arab Muslims encountered already existing structures, which facilitated the purchase of slaves for their purposes.

"Slavery was part of different African cultures," explains Abdulazizi Lodhi, Emeritus Professor of Swahili and African Linguistics at the University of Uppsala in Sweden. "When it came to exports, tribal Africans themselves were the main actors. In many African societies there were no prisons, so people who were captured were sold."

From the 17th century onward, the slave trade in East Africa really took off. More and more merchants from Oman settled on Zanzibar, the islands took an ever more important role in the international trade of goods due to the large trade at the Swahili coast and consequently also in the slave trade. This is how the largest slave market in East Africa was created.

How many Africans were sold to the East and to North Africa - there are only rough estimates about this, some of which vary widely. This is also due to the high losses: Scientific research concludes that about three out of four slaves died before they reached the market where they were to be sold. The causes were hunger, illness or exhaustion after long journeys. Author N'Diaye estimates the number of Africans at 17 million: "Most people still have the so-called transatlantic trade of Europeans into the New World in mind. But in reality the Arab-Muslim slavery was much greater: eight million Africans were brought from East Africa via the Trans-Saharan route to Morocco or Egypt. A further nine million were deported to regions on the Red Sea or the Indian Ocean."

The spice of slaves

A number that Lodhi can't comprehend. "17 million? How is that supposed to work if the total population of Africa at that time might not even have been 40 million? These statistics were not collected then." And old reports were partly methodically doubtful. David Livingston, a Scottish missionary and Africa researcher, had calculated that 50,000 slaves had been slaved annually on the markets of Zanzibar. "Not even today could 50,000 people live on Zanzibar. The numbers have neither hand nor foot," said the Tanzanian professor.

By no means all slaves were brought to Egypt or Saudi Arabia. From 1820 Omani settlers cultivated carnations on Zanzibar to meet the growing demand on the world market. Large plantations quickly developed and slaves could be bought cheaply on the nearby slave market. From 1839 to 1860 the quantity of exported carnations increased from 565 to 12,600 kilograms, according to the US-American historian Frederick Cooper. Zanzibar's character changed...from the center of the slave trade to a center of slave keeping, which produced notorious figures such as the legendary slave trader called Tippu-Tip.

The end of slavery?

At the end of August 1791 a slave revolt began in today's Haiti and the Dominican Republic, which pushed the abolition of the transatlantic slave trade, slavery and colonialism in Africa. But it was not until 1873 that Sultan Seyyid Barghash of Zanzibar, under pressure from Great Britain, signed a treaty that finally made the slave trade illegal in his territories - although it was not enforced effectively either. It was not until 1909 that slavery was finally abolished in East Africa.

In 1909 slavery was finally abolished in East Africa

According to author N'Diaye, however, there can be no question of an actual end: "Today, it is estimated that nearly 40 million people worldwide still live in slavery. In Africa there are hundreds of thousands. "In Mauritania they say they have abolished slavery, but in reality the situation in North Africa has not changed much. Young people are enslaved against their will, forced to work and sexually exploited". There have been reports from Libya about organised slave markets that a few years ago a case of slavery had also been uncovered in Tanzania, according to Lodhi: "A mine was found in a remote area where 50 to 60 boys were forced to work. They were not paid and lived in a camp guarded by armed men."

The effects of slavery in East Africa are not as severe today as the severe economic consequences of Western colonization of Africa, says N'Diaye. "The economy of many of these countries is still dominated by the West, and that is what African intellectuals are discussing. But N'Diaye demands that what happened in East Africa over the centuries should also be openly discussed. "Most of the African authors have not yet published a book on the Arab-Muslim slave trade out of religious solidarity. There are 500 million Muslims in Africa, and it is better to blame the West than talk about the past crimes of Arab Muslims," criticizes N'Diaye.