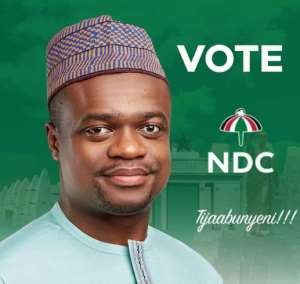 In the military profession, the selection of captains to lead battalions to battlefield does not rest solely on the strength and intelligence level of the generals but their experience and contributions that overturned outcomes of past battles; and their vast knowledge on the SWOT ( Strength, Weakness, Opportunities, Threats) of the commanding army and that of the enemy is assessed as well. Leadership entrusted unto the hands of such Captains is an assurance that the battle is won in the minds of the troupes before the battleground.

The focus of this epistle is not meant to demonstrate my understanding on selection of leadership in the army for battles, rather, the inferences from their selection of leaders into ranks are to be used as a guidepost for the NDC going into the primaries slated on 24th August 2019. The rehearsals to this upcoming day are on course and every candidate is employing all forces within their reach to give the match a good sight. It is true that the intensity of every training many a time determines the results of the match. But I hope this training is injury-free and represents the best of the game!

However, interview granted by Dr. Sharif Mahmoud Khalid on 14th August 2019 on Citi FM gives me a reason to worry. I wonder whether Dr. Sharif really stayed in Wa Central constituency or not. Even if he hasn’t stayed in Wa Central, but it is fair as a person who aspires to lead the constituency he should have considerable knowledge about where he wants to lead! He displayed in the interview that he has little or no understanding of the people and the place he aspires to lead. First of all, Did Dr. Sharif Khalid lied when he said M. A. Seidu the former Parliamentary candidate of Wa Central went to parliament only two terms? That will mean that M. A. Seidu, started his reign in 1992 and ended it in 2000. So who represented Wa Central in the 2001-2005 electioneering term or this period was a sinister-interregnum in the history of the constituency? Simply, he was trying to play smart to the public gallery to fall into his trick believing that Dr. Rashid Pelpuo is power-drunk indispensable person. Unfortunately, his view is too narrow when you compare it with the political history of Wa Central and the personality at the Centre of his interview. Maybe, Dr. Sharif Khalid is just a novice in the geopolitics of Wa Central who has no grasp of the issues and needed help by saying the wrong stuffs in exchange for right answers? OK! I’ll seize the opportunity to take him through tutorials of Wa Central geopolitics:

Again, Dr. Sharif Khalid in his interview with Citi FM said that one of the reasons why he’s contesting the Wa Central seat is that the votes of the Parliamentary candidate kept reducing relative to the presidential votes in the constituency. On this point, I’ll like to paraphrase the first Deputy speaker of Parliament, Alban S. K. Bagbin when he was asked on Home Radio why the presidential votes are always higher than the Parliamentary votes in the constituencies as a justification. He said, the Parliamentary candidates are more closer to the communities and the issues, and a lot of factors come into play in determining their fortunes in elections. He stated ethnic, religious, cultural, denominational and a host of litmus indicators Parliamentary candidates are subjected to pass through before their election; unlike presidential candidates who are farther from the people and the issues, and might not necessarily be required to pass through those litmus tests. An easy example is the 2016 elections whereby Dr. Rashid Pelpuo was religiously maligned and it nearly caused him in that election. Whereas ethnic bigoted remarks were attributed to Nana Addo and the NPP in the 2016 elections yet they won the elections with a wide margin. Therefore, the novices in politics should know that the presidential candidates often beat most Parliamentary candidates if not all in the various constituencies across the country. So this view by Dr. Sharif is flimsy and doesn’t fit to appear in the front pages of any paper.

Besides, Dr. Sharif is on record to have said in the interview granted, that, Hon. Rashid Pelpuo only best electoral fortune was in 2008, which is a fact. But will Dr. Sharif agree with me that it is only in 2008 that Hon. Rashid Pelpuo didn’t have an internal contest before the general elections? It evinced that all forces in that year (2008) were mobilized and united for a common purpose. And at the same time, it is speaking to an academia that the reduction in Parliamentary votes cannot be aligned to the man on the ballot paper but it is the factors and the contestants that tear apart after primaries and resurface only in the next primaries to contest. Therefore, we can always willingly have an increase in votes if all forces put their shoulders on the wheel for that common goal and advise their votaries to support whoever that would be elected to lead the party.

Reviving it was when I heard Dr. Sharif’s British accent on the radio, it really revoked my dying needing interest to be in Europe again. That’s the beauty of the NDC! But similarly, I believe that those Dr. Rashid Pelpuo has equally assisted to further their studies in Europe may have an accent like him too. Which he never noticed as part of Dr. Rashid’s achievement. As a party member, I’ll rekindle my lost hope and hope for the right tidal wave to carry me across the seas too. However, that’s not the issue I wanna delve into! Before I could wade into the thinking that Dr. Sharif has carried the Whiteman’s ways to my people, he just announced his intention to build an MP’s office in my constituency if given the opportunity. Wow! But I hope when you build it, you won’t introduce red-tapism that will not only make it difficult accessing you but fearful to approach you as introductory letters will be a prerequisite for meeting you? Hmm! In the words of Chinua Achebe, “The Whiteman is very clever. He came quietly and peaceably…Now he has won our brothers…{and} He has put a knife on the things that held us together and we have fallen apart”. But if I may ask Dr. Sharif again, how do you manage to do all those activities you mentioned as your achievements in the interview without an office as an aspirant? Can you now be certain that you don’t necessarily need an office for some aspects of development to take off? Thanks to Technology! I’m not in any way discounting the importance of a physical structured office but the use of SMS, Phone calls, Whatsapp and the rest have worked better to bring leaders and their followers to solve community problems and have even eliminated the bureaucracies associated with traditional office system. For instance, the use of social media by Ghanaians to register their displeasure over the construction of a new “Parliamentary Chamber” led to the government dropping that decision. So Dr. Sharif should know that party office is not a precondition for development in Wa Central. Besides, have you pause to look at the dynamism of the people you seek to lead and their interactions with formal British ways? These are hanging questions but you can decide to explore them a bit as an academia who is interested in the sociology of Wa Central.

Lastly, for the GETfund claims, there’s no need to go there. Because the journalist queries in that area have done more than enough. Even the Common Fund, it is shared according to specified development indicators! Nonetheless, what borders me most is Dr. Sharif familiarity with the constituency is questionable. After Hon. Rashid Pelpuo said that only one village in the constituency is not connected to the power grid, Dr. Sharif rejected that claim and said that it is more than one. But when he was pushed to mention only three communities that don’t have electricity in the constituency, he couldn’t. Did he go there to deceive us or he just doesn’t have a fair knowledge of Wa Central and its people?

Accidentally, Let’s assumed Dr. Sharif is given the nod to lead Wa Central in the 2020 general elections, what will he campaign on? Because herein a man who would not know that his predecessor constructed a 6-unit classroom block at Jahan Demonstration, renovated Boli CHPS Compound, lobbied for Jambusi water project, connected many communities to national grid, fenced the Jenjen crocodile pound, renovated Wa Naa’s palace, constructed Nabihii graveyard and many more which today served as tourist attraction in the constituency. I said this because Dr Sharif has made it clear in his interview with Citi FM that he doesn’t know what Dr. Rashid Pelpuo has done to reflect development in the constituency. It means that he’s a stranger who doesn’t know the party’s achievements and therefore can’t market it to any voter in the constituency. Imagine we match such a candidate with the NPP, losing the seat would be our ultimate price to pay.

In conclusion, the problem of Wa Central is nothing other than the political novice who shouts from rooftop but knows nothing about what is done or to be done! But as we go into the polls on this Saturday, always remember that we have a seat to retain and vote wisely!