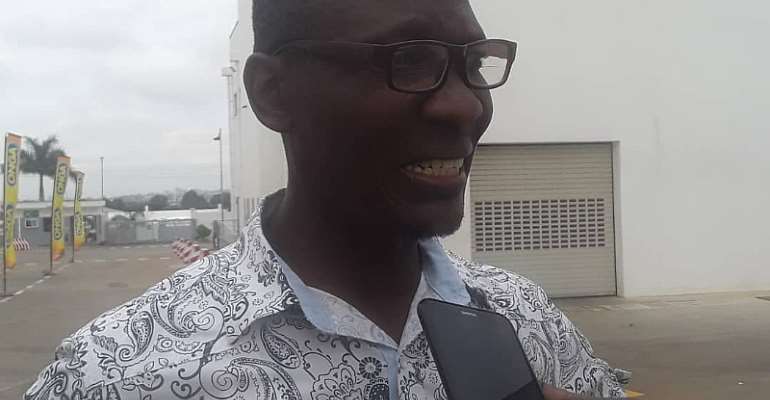 Special Aide to Presidential Candidate of the United Progressive Party (UPP), Harry Nii Tackie Otoo is calling on the Acting Inspector General of Police (IGP), James Oppong-Boanuh to revise the six months training of police recruits emphasising that it does not provide enough room to prepare the law enforcement officers.

According to him, the short period does teach the recruits much about the 'Dos' and 'Don's' thereby affecting their output went sent out to work.

In an exclusive interview with Modern Ghana on the side lines of the three missing Takoradi girls, the Special Aide said "I will not say the State has failed us, rather the Ghana Police service has failed woefully because the training given to the men and women in uniform are not good enough. The mental resource provided them are not adequate. If you go to the hairdressing schools, it takes three years before a learner graduates but to the surprise of all, the Police uses six months to train its men.

"The education and training must be extended so that they can have the actual resources they can do their jobs with. I am off the view that the policemen and women were sabotaging the out gone IGP, David Asante Bediatuo when he was in power."

A year ago, it emerged that three girls had gone missing in the Takoradi Metropolis. As a result, most Ghanaians took to social media to lambast the police in failing to update citizens on the whereabouts of the three.

Months later, CID Boss, Maame Tiwah Addo Danquah held a press conference telling the world, the know the whereabout of the girls. Weeks later, it emerged that the information from the police were lies and this got many Ghana and civil organisations asking the CID Boss to resign or be fired.

Recently, there were reports that the police have found some bones suspected to be that of the girls.

However Mr. Harry Otoo says he is confident that under the watch of the former IGP, some police officers lackadaisically paid little attention to the much-talked-about incident but are currently working tirelessly in finding them.

"Under the watch of the former IGP, less efforts were added but immediately he was removed from office, these same policemen and women have carried weapons, helmets among others to various crime scene conducting investigation following tip-offs," he disclosed.

On politics, Harry Nii Tackie Otoo says Ghanaians would have enjoyed economic freedom if the party were voted into office.

He said "I don’t believe in stronghold as far as democracy is concerned. It is a perception. There is no way someone can say this is the stronghold because Ghanaians intermarry and the term ‘stronghold’ has got no meaning to our party but it is the richness of one’s ideas, policies and manifesto is what must convince the people. Let us not forget Nkrumah is from the Nzema land but yet, his ideology sold for him to win and become Ghana’s President."

Mr. Otoo highlighted that when given power, the UPP will ensure that Ghana becomes a hub for investors.

"When the UPP is given power, our main idea is business. How to get foreign investors to invest in the country, instill business knowledge in the minds of citizens. Per our motto, Economic empowerment, we are expecting Ghanaians to bring us on board for all to get power in being economical," he emphasised.

On the performance of the NPP, he scored the ruling government 55percent emphasising that it has delivered on most of its policies.

"I will score the government 55% because they have done a lot within these three years. They assured Ghanaians of Free SHS and they have delivered among others. They have by far better than the NDC," he stressed.

He quells the perception that Ghana is being run by only NPP and the largest opposition party, National Democratic Congress (NDC).

"I don't want to believe that Ghana is being run by only two Political Parties because both the NDC and NPP were a smaller party before they became a bigger one. Its not as if none of the smaller parties can not match up to them but they do not give ample time for us to share their ideas and that is why UPP led by Odike have decided to start their campaign very early so that they can sink down their messages to the people of Ghana. He has a package of business and that of the economy among a lot he wants to do so I don’t want to believe that its only NPP and NDC that is supposed to rule Ghana. No!," he recounted.

Harry Otoo highlighted the need for Ghanaians to allow other political parties to stir the affairs of the country.

"We should allow every political party to bring their idea and after NPP and NDC is out, that is where and when we will know their strength. For now, we don’t have any formidable political party that can match up to them," he stressed.

He revealed that the UPP could not meet the requirements of the Electoral Commission hence, its exit from the 2016 Presidential elections.

"We could not make it in the first opportunity we had because we were not able to satisfy the requirements from the Electoral Commission and that made them close the nominations. Its not something that we lack just that we did not put things right. We are a credible political party and we match up to every political party. We are ready this time because we have gotten all the major office and representatives. We are now descending to the constituencies. We believe that this year will be a year of impact," Harry Nii Tackie Otoo intimated.

According to him, the UPP will be starting its campaign tour soon and is confident the masses will accept as well as vote them into power.

" The smaller lack the sense of making a name for themselves earlier. The two big parties already have their names. This is why UPP wants to start now so that the good people of Ghana can get to know and understand our ideas. We don’t want to start after them else, the people will not understand us.

"That thing did not help because most parties will not buy into the vision and ideas of others. I don’t believe it. Most of them will not accept to convert ideology into realities. A vision is one thing that an individual carries and needs people to push behind it," he stated.

Harry Nii Tackie Otoo commended the ruling NPP for expanding the regions to 16 adding that UPP will sweep all the seats in the 2020 general elections.

"We thank the NPP government for expanding the regions to 16. It’s a good call and I commend them for that but we are currently working on the other regions because the requirements from the Electoral Commission says that we should get more offices, both regional and strong constituencies," he noted.