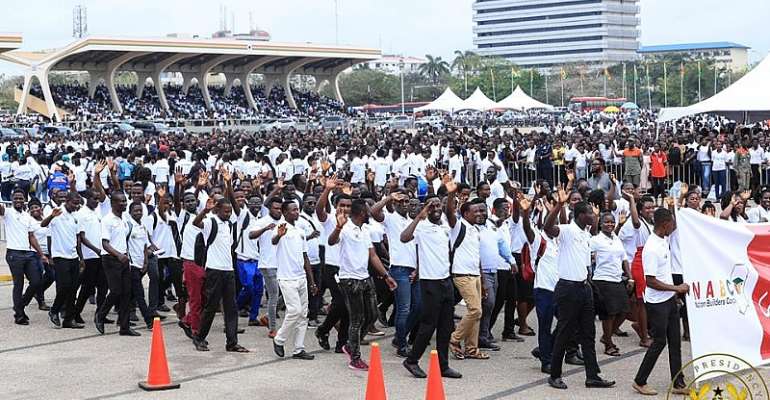 Management of the Nation Builders Corps (NABCo) says it will be needless for some trainees to protest on Monday over unpaid allowances.

According to the Public Relations Officer of NABCo, Iddrisu Tahiru, some of the trainees had issues with their e-zwich cards because their banks had been consolidated by the Bank of Ghana.

All trainees who banked with banks consolidated by the BoG had to get new updated e-zwich cards from their respective banks, according to Mr. Iddrisu Tahiru.

He further described the planned demonstration by the NABCo personnel as unnecessary.

Iddrisu Tahiru questioned why the NABCo personnel will want to embark on a demonstration when the management of the program had also updated them on the latest developments.

Mr. Tahiru further disclosed that plans are already underway to pay the allowances.

“So the problem is that, these trainees had their e-zwich from banks that were consolidated. So their e-zwich cards became inactive. So NABco tried paying them but we couldn't pay them, so we sent them messages to go and get new e-zwich cards, some of them did and they were asked to go back to the portal and update their e-zwich cards and we are about to clear them currently.”

“I don't understand some of our trainees ….It is very unnecessary, why are you demonstrating ? Every step we have taken, we have kept them informed.”

Some trainees with NABCO earlier this week threatened to hit the streets in a peaceful march on Monday if the government does not pay arrears owed them.

Some of the over hundred trainees, who either had issues with their e-zwich numbers or bank accounts, say they were promised that they were going to be paid by June 5th.

Convener for the group of NABCo recruits, Alexander Ofosu told Citi News they believe a peaceful protest will draw government's attention to their plight.

“We have not still been paid. We want to emphasis our anger by going on a peaceful demonstration to remind the NABCo secretariat that we are still starving and hungry. We are going to have a peaceful walk so they hear our cry,” he said.

Regulatory agencies to begin random checks at offices to ens...
3 minutes ago