Messrs Mahama and Nketia aren’t serious on the hardships pronouncements, are they? 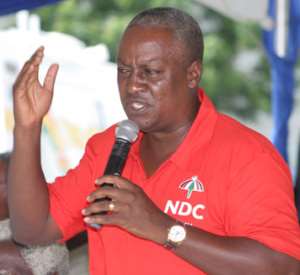 The former president and NDC’s 2020 flagbearer, John Dramani Mahama and the General Secretary of NDC, Johnson Asiedu Nketia’s assertion that Ghanaians are incensed on Akufo-Addo’s leadership style which has allegedly brought about untold hardships is fallacious, so to speak (see: Ghanaians are angry about Akufo-Addo’s leadership style-Mahama, ghanaweb.com, 09/07/2019).

Apparently, it is being reported that Messrs Mahama and Nketia were soliciting for support amongst Ghanaians to join their just ended controversial ‘kum yen preko’ demonstration, and therefore decided to put across such a monstrous gaffe.

To be quite honest, it is quite bizarre for the likes of Mahama and Nketia to blame Akufo-Addo’s government for any hardships on Ghanaians, while ignoring the Mahama government’s dreadful errors in decision-making which invariably destabilised Ghana’s macroeconomic indicators amid puzzling heightened debt stock.

"With the help of a skilful and continuous application of propaganda, it is possible to make the people conceive even of heaven as hell (Adolf Hitler)."

Obviously, the ‘kum yen preko’ chorus is an illustrative case of: “Make the lie big, make it simple, keep saying it, and eventually they will believe it” (Adolf Hitler).

In any case, it is somewhat sophistic and to some large extent oxymoronic for Mahama and Nketia to assert inexorably that the thriving economy under the Akufo-Addo’s government is not reflecting in the pockets of Ghanaians.

The last time I checked, the Nigerian scholar who gave a presentation at the NDC’s recent forum has confirmed Ghana’s thriving economic under the NPP government.

Take my word for it, dearest reader, I am not suggesting for a moment that every single Ghanaian life has been transformed tremendously under the Akufo-Addo’s administration, far from it.

But the fact remains that since assuming power on 7th January 2017, the Akufo-Addo’s government has rolled out numerous social intervention programmes and policies with the view to transforming the lives of ordinary Ghanaians.

Truly, the vast majority of Ghanaians are benefiting immensely from the implementation of many social intervention programmes and policies such as the Free SHS, One Dam per Village, One District One Factory, One Million Dollar per Constituency, Planting for Food and Jobs, Planting for Export and Rural Development, Rearing for Food and Jobs, NABCO, the restoration of the Nurses and Teachers Allowances, amongst others.

How could Mahama claim that they, (the NDC government) had edaciously consumed all the meat on the bone and then turn around and accuse his successor of imposing hardships on Ghanaians?

If you may recall, former President Mahama was alluding to Ghana’s unprecedented economic collapse as a result of mismanagement and rampant corruption under his watch.

Thus, some of us cannot get our heads around how and why the same person who regrettably contributed immensely to the current plight of Ghanaians would be up in arms shouting from the roof top about the supposedly slow pace of development, barely 30 months of NPP government assuming power.

How on earth would someone who revoltingly send Ghana’s economy deeper and deeper into the mire in a space of 96 months turn around and accuse his successor of not fixing the mess quickly in barely 30 months into 48 months mandate?

Let us admit, it was the same x-President Mahama’s government that profligately spent excessively and above its means, and, in the process needlessly increased our total debt from GH9.5 billion in 2009 to GH122.4 billion as of December 2016 with a little to show for.

This means that there was virtually no money left in the national purse for the incoming NPP government to turn things around as quickly as possible.

It is, therefore, quite unreasonable for the same person to expect the Akufo-Addo’s government to keep all its promises within a short space of time.

Let us however be honest, despite the massive economic mess left by the erstwhile Mahama’s maladaptive administration, the current NPP government under the able leadership of President Akufo-Addo has prudently undertaken a number of social interventions to the delight of Ghanaians.

Since assuming power, the Akufo-Addo’s government has taken estimable strides to improve the social mobility chasm through implementation of poverty reduction policies and programmes.

It is also worth stressing that in spite of the huge economic mess created by the outgone NDC government amid stunted economic growth, the Akufo-Addo’s government has efficiently raised the economic growth from a nauseating 3.4% as of December 2016 to around 8.6% within a short space of time.

Upon taking office, the NPP government has dramatically reversed the inflation rate to a single digit from a little over 15% as of December 2016.

Voters’ Registration: Everyone Will Be Safe – A/R Minister A...
48 minutes ago