Kenya embarks on French boot camp ahead of Africa Cup 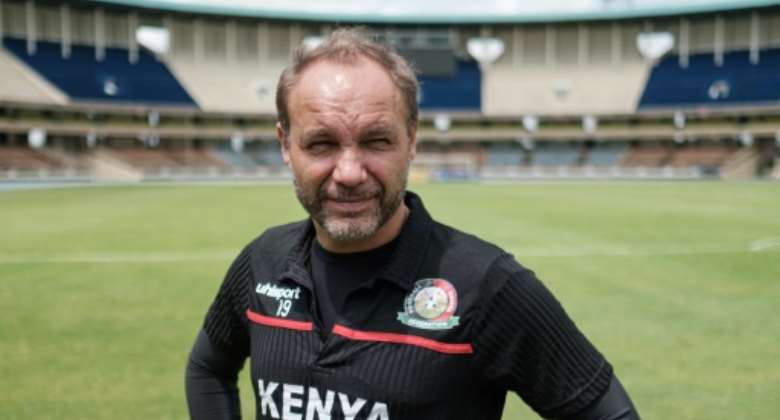 Kenya's French head coach Sebastien Migne is taking to the team to France for a 'boot camp' in preparation for the 2019 Africa Cup of Nationsin Egypt from June 21.. By Yasuyoshi CHIBA (AFP)

Kenya's national footballers depart Friday for a boot camp in France, where coach Sebastien Migne plans for a distraction-free training blitz before their first Africa Cup of Nations appearance in 15 years.

Migne, a Frenchman, has designed the three-week programme to prepare the Kenyans -- ranked 108th in the FIFA world rankings -- for their grueling group phase with Algeria, Senegal and Tanzania.

Migne said the squad he handpicked for the tournament, starting June 21 in Egypt, would benefit from the change in scenery and intensity of the regimen in Marcoussis, France's national rugby training facility just outside Paris.

His selection early May of the 30-man preliminary squad for the Cup -- an Africa-wide tournament held every two years -- attracted considerable attention from Kenyan football pundits and fans, not all of it positive.

The head coach said it was "difficult to stay in the country" and focus with these distractions weighing on his players.

"There were a lot of comments at that time, and we need some peace and quiet to prepare for this competition," Migne told AFP after a training session in Nairobi ahead of their departure for France.

"And the weather was very important to me. During this preparation, we will have many sessions, sometimes three times a day and you can't do that in a hot country.

The 46-year-old Migne added he was "really proud" to bring the team to his home turf for preparation.

Kenya's French head coach Sebastien Migne speaks to players during a training session ahead of the 2019 Africa Cup of Nations. By Yasuyoshi CHIBA (AFP)

Football is hugely popular in Kenya but the Harambee Stars, the national team, have often been found wanting.

They enter the Cup as underdogs, having only qualified six times since its inception in 1957. They have only ever won one game and never reached the knock-out stages.

Their passage to Egypt for this edition was capped with a surprise victory on home soil over Ghana, one of the continent's top performers.

But Migne has urged his men not to dwell on the past, and focus instead on emerging from the group phase for the first time ever.

Last year is the past. What is important now is to confirm (our performance)... we're not going to go to Egypt as tourists," he said.

He is banking in part on star Victor Wanyama, the Tottenham midfielder and Kenyan captain, who could play in the Champions League final against Liverpool just days before training for the Cup is to begin.

"The (Champions League) final takes place on June 1. I will let him celebrate his trophy for two days, and on the morning of the 4th, he must be in Marcoussis," said Migne.

"He knows it, it's a pact we've made," the Frenchman added with a grin.