You Are Lucky That I Have Nothing To Write About 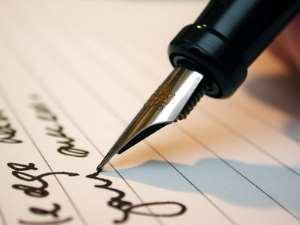 Sometimes nothing makes sense, and so you just have to do what you feel like doing. It makes you feel good, just for the sake of feeling good, and it makes you forget about satisfying everyone. In that state of doing what it feels good, one finds pleasure and a certain kindness towards the self.

Today is one of the rare occasions when I test myself under pressure, with speed, to know if it works, just for the sake of believing in myself. Whichever it goes I believe I will be able to end well, under the circumstance.

I usually devote half of my Tuesdays or my Wednesdays, depending on what the topic is, for the writing of Simpa Panyin. I have done this for over three years now, so I guess I have fairly been in the mood whenever it is time to write.

But like all other situations, life in the hands of the pen is not always smooth. There are days when I had stayed behind the computer, with clear ideas, but refused to take off. These are instances when the words simply refuses to pour. It has ever happened when I have spent the entire day struggling to string words together.

I recall the day I wrote about the visit to Ghana of the then President Robert Mugabe. The man had been quoted, or should I say, misquoted by nearly everyone in Ghana. He had become a household name, and in most cases these quotes and misquoting had been done comically. So I really wanted to do Justice to his visit, with a befitting tribute. I had gleaned nearly one hundred versions of the fiercest quotes on him, ready for what I anticipated to be my best comic exploration in the column. I write best when I refuse to bath. It makes me feel like in the days when children were at our best in the backyard, innocent boys and girls giving everything freely to each other.

So with my laptop set on the table, and with the materials all arranged according to my chosen sequence, I began to sketch my subject with comic intentions. I had set the scene on the designs of President Mugabe’s mustache, ready to trace his journey from the Harare airport, to Accra, and my anticipation of what he was likely to say upon arrival.

I wrote my first sentence, with speed, but the second sentence came with a slowed pace, and then I realized I was struggling with the third sentence. As the first paragraph came to a close, I realized I had nothing for the second. I had lost the ability to produce words together in any meaningful manner.

I sat thinking about all the things that this man had said to the United Nations, about same sex marriage, about aid, about Britain, America, David Cameron, and all the things that he had said about his opponents, all the bravery he had exhibited, the pouring into this world of some of the most hilarious speeches; how do I leave this man alone when there was this opportunity to lift a cup for him?

Anyway, I ended up writing, deleting, rewriting, changing the title, bringing old versions back, and redesigning the concept, until I realized I could not write any longer. At a point I decided not to write about him anymore.

The thing about writing is that it is a very lonely journey, even more than being an entrepreneur. Everything, content, flavor, flow, are conceived and birthed by the writer. The goal of every writer is to invite the reader to keep reading, and for him to want to read the next article done by the writer. Quality control is therefore a way to cultivate your reader and make him your own. One cannot therefore produce any poor work and expect the reader to know that the writer was hard press for time.

Today is one of the few days I wish I had sufficient time to write a good article based on the economy. For instance I am told Dr. Bawumia, the Vice-President of the Republic of Ghana, is addressing a town hall meeting, to discuss the economy. Some three years ago he asked the then Vice President 170 questions. I would have loved to hear Dr. Bawumia’s answers to his own questions now that the Cedi is dying.

But I have only one hour to submit today’s article. Any attempt to talk about Dr. Bawumia will take me into why he has refused to deliver his usual lectures, and why Dumsor is back. I may even be tempted to know if the one-this-one-that has taken off, and if he might be interested in revising his lecture notes given a second chance.

Unfortunately last weekend was busy for me, and it has been busy till today. I celebrated my birthday with a few people, with a walk through some of the streets in Winneba. Of course I have hardly celebrated my birthday. After all I don’t even know when I was born. So my current official date of birth was granted to me by my teacher when I was in school. But it was a good feeling knowing that I have a few people who naturally love me, and who I love too.

Early before the walk had begun, a motorcycle had hit an elderly cousin of mine, and the accident had proven to be fairly fatal for both the rider, and the elderly man, with doctors having referred the elderly man to the regional hospital. Uncle Kojo Akotey, as I usually call him, had come to visit his sister, and on his way home had a near collision with this young man, also from the same community. Yours truly, Simpa Panyin, had to rise up to the occasion, ensuring that the best available medical attention was given to both of the victims of the accident. So what should have been a rest after the weeklong stretch, turned into a continuing trekking journey between hospitals.

I returned too late, and too tired to write. The option was for me to call the editor to give a reason why Simpa Panyin is not going to appear, but then I remember that sometimes I write better when I write about nothing. So here we go, with nothing to write, at least, you have read something about nothing.

Still, the battle is the Lord’s!