Shaanxi Mining Fined $50,000 But No Compensation For The Deceased 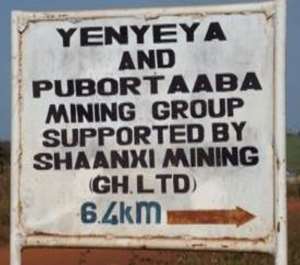 Report of the investigations conducted by the Inspectorate Division of the Minerals Commission in the wake of the mine-blast that killed 17 in the Talensi district in January this year has found Shaanxi Ghana Mining Company and it’s compatriots Pubortaaba and Yenyeya Mining Groups guilty on five counts attracting a $50,000 fine.

This Chinese company Shaanxi went to the Upper East sometime in 2008 with a Mine Support Service certificate to assist two small scale mining companies namely Yenyeya and Pubortaaba Mining Groups whom they had entered into agreement with to provide mine support services.

Addressing a section of the press to officially adopt and make the report public, the Minister for Lands and Natural Resources(MLNR) Mr. Asoma Cheremeh indicated that the fine was for breaches of mining regulations and neglect of duty on the part of Shaanxi operatives that led to the deaths of 17 alleged illegal miners in the Gbane community within Talensi.

These 17 dead were supposed to be mining in and around concessions close to Shaanxi’s mine site on that fateful day when the poisonous gaseous substances emanating from Shaanxi’s explosives gassed the living daylight out of them.

Again, they were also charged with failure to ensure that a Code of Safe Work Practice for blasting is approved by an Inspector of the Commission (Regulation 515 of L.I 2182) as well as failing to record the blasts that were undertaken on January 22 in the Shift boss Logbook, a breach of Regulation 47(10) of L.I 2182.

The report also directed Shaanxi Mining Ghana Limited to sack it’s foreman, for abandoning his post during the blast whilst Yenyeya and Portaaba Mining groups were fined $10,000 for failing to have blasting notices pasted in the Gbane community which is in breach of Regulation 193(f) of L.I 2177.

What was conspicuously missing from the report was recommendation for compensation of any kind for the relatives of the 17 who died on the hands of Shaanxi’s negligence.

Meanwhile, in an earlier investigation report from the same Minerals Commission in 2012, “the Committee made a number of findings, including that Shaanxi was indeed operating outside authorized areas and that the company had not paid appropriate compensation for shea and other crops destroyed during operations.” It was also re-emphasized at the tail end of the Committee report that “Shaanxi must desist from operating on unauthorized areas, including conducting any exploration or underground activities outside it’s authorized areas of operation”.