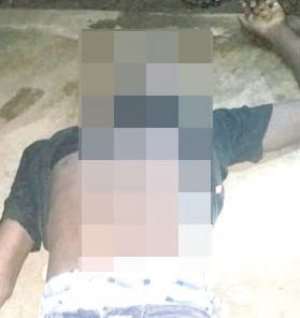 The mysterious deaths of two male teenagers in Dormaa Districts of Bono Region have set tongues wagging in the area. The deaths of Emmanuel Mensah, 18, and Kwasi Bright, 15, which occurred within a week, is now a topical issue in the area.

Kwasi Bright's body was found in front of a kiosk near a rural bank at Dormaa in a pool of blood.

A search conducted revealed bruises on the right side of the forehead, indicating that he was either beaten or strangled.

The deceased was found in blue jeans over a black T-Shirt.

The body of the deceased was deposited at the morgue of the Presbyterian Hospital at Dormaa Ahenkro pending autopsy.

In the case of Mensah, 18, a pupil of Akwamu Methodist Primary school, his body was found in a 'galamsey' pit at Dormaa Akwamu.

The body, which was found in an advanced state of decomposition, was quickly buried upon advice of health authorities in the area to prevent the outbreak of disease.