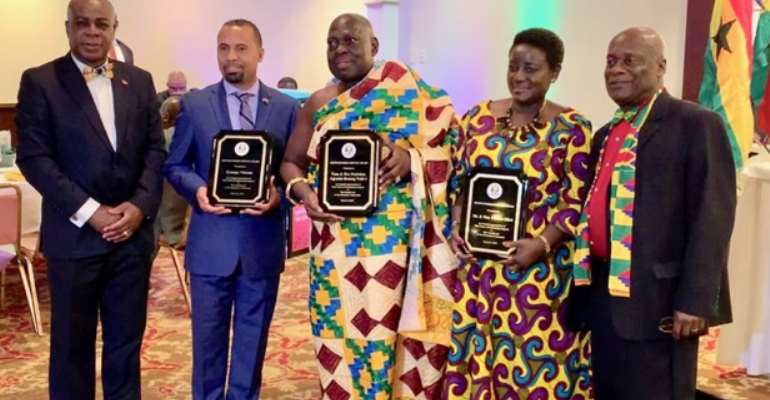 Ghanaians in the Washington metro area under the auspices of the Council of Ghanaian Associations (COGA) marked the 62nd independence celebration of Ghana on Saturday, March 9, 2019, at the plush La Fontaine Bleau event center in Lanham.

The aim of this event was not only to celebrate but to raise funds to provide beds to hospitals in Ghana. The event was sponsored by South African Airways and World Remit money Transfer Company. Speaking at the function, the representative for the South African Airways noted that the Dulles-Accra route has seen a lot of growth and as a result, the frequency of flight will be increased and a new aircraft put on the route.

World Remit appealed to the community to take advantage of their promotions and good services for effective money transfer to Ghana.

The chairman of COGA, Mr. Henry Adu called on all Ghanaians to join hands to help put Ghana where it should be. He continued to point that we can start this by joining the various associations that belong to COGA and contribute our quota to national development. He appealed to those working in the health sector to keep an eye on beds that may be marked for replacement for COGA to get this information and get them shipped to Ghana.

The Head of Consular Affairs of the Ghana Embassy to the United States of America, Mr. Joseph Ngminebayiih, speaking on behalf of the Ambassador, Dr. Barfour Adjei Barwuah, noted that Ghana, as we all want her to be, is not what we have now but collectively we can all bring her to where she belongs. He called on all to help COGA achieve the goals that have been set in order to achieve self-dependence as a nation.

He also called on all to verify news information on visa sanctions on Ghana as some of the news items are not accurate. He called on Ghanaians to abide by and show respect to the laws of the United States of America.

Mr. Gabriel Pomary, the chairman of the event who is also the chief executive officer of Intraworld Travel Systems, thanked South African Airways for the confidence reposed in Ghana and the expected improvement in service on the Dulles –Accra route. He also took the opportunity to invite all to come to celebrate 400 years since the middle passage and the arrival of slaves in the USA. The government of Ghana has declared the year 2019 for this event in Ghana. He also noted some achievements of COGA in securing landing rights at BWI airport for the national airline, Ghana Airways, in 2000. COGA also participated actively in the Millennium challenge meeting that helped build a development partnership between Ghana and the USA. Mr. Gabriel Pomary, stressed that by choosing to provide beds to hospitals in Ghana, COGA has chosen a noble path to help fellow countrymen and women. He noted that one noble thing we all need to aspire to be to make a difference in someone’s life and be each other’s keeper. Members were called upon to be altruistic in their contributions for a noble cause to be realized.

Music for the night was provided by DJ Rek who bridged the gap between old and new schools of music in Ghana. The MCs for the evening were the indefatigable William Adzimahe and Professor Margaret Tabiri, the lady with the angelic and mellifluous voice.