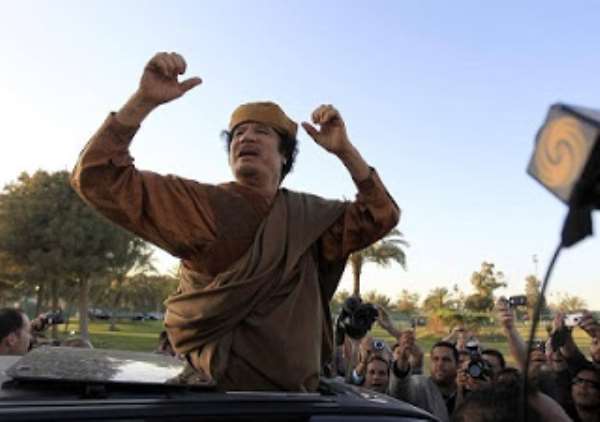 On October 20, 2011, the former head of Libya, Muammar Qaddafi, was killed in the vicinity of the besieged Sirta. The convoy, in which Gaddafi tried to escape from the city, came under the blow of NATO aviation, which had been conducting a military operation in Libya since March 2011.

In politics, the mouth that hails the politicians, Hosanna! Hosanna! Here comes the best president who will be interested in our welfare, would be the same mouth that will shout, crucify him.

The best Ghanaian leader Ghana has ever had is Nkrumah. After freeing the country from colonial oppression, the man who was named “Osagyefo – Saviour;” for his political efficiency, later became the “Devil of Ghana,” and his statue was broken down. Today, his statue has been erected again.

Qadaffi is the only African leader able to build his country in the standard or even better than Europe and America. Yet, under the influence of the British and American governments, the Libyans poured out their anger and hate on their leader.

As a result of a strike, the former Libyan leader was injured in both legs and head. Wounded Qaddafi took refuge in a drainage structure, but the rebels supported by the West, one of the detachments of the Transitional National Council of Libya, captured Qadaffi and later brutally killed.

Seven years after Ghadaffi was killed the country actually broke up into several territories controlled by different factions. The oil-rich regions went into the hands of extremists and the population lives on the verge of poverty.

Muammar Qaddafi, who ruled Libya for 42 years, overthrew the monarchy and established a new political regime in the country, the Jamahiriya, which was different from both the monarchy and the republic.

During his reign, the revenues from oil production were allotted to social needs, to which large-scale public housing, health care, and education programs were implemented in the country.

With many people without electricity, no money and even those who have the account cannot cash them out, because there is simply no money in the country, Libya now misses Ghadaffi dearly, reflecting on the truth “You will only miss your water when your well runs dry.”