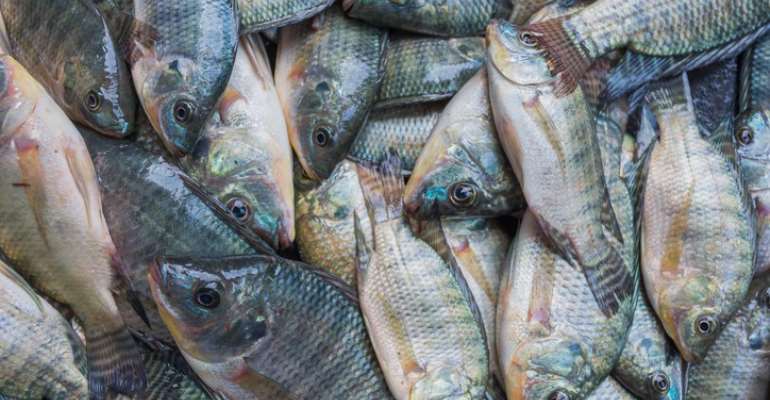 Introduction
The aquaculture industry has a great potential and a pretty consistent value chain that is increasingly becoming an important employer of people from varied social classes. With functional structures in place, the industry can be a major income churner for the national economy. However, the industry is bedevilled with a plethora of challenges thereby reducing the realisation of these benefits to the people of Ghana. Fish survival to harvest is dependent on a lot of factors, chief amongst them being the of good water quality for fish. The Volta lake has been the heart of the tilapia industry; the lake has good quality of water suitable for the culture of this fish and coupled with good management practices and good feed, fish farmers on the Lake stand to have good productivity levels barring any uncontrollable events. The Volta Lake has the potential to sustain aquaculture to produce fish to feed the people of the sub-region and beyond. Generally, heavy mortalities in fish farming has to do with poor water quality or diseases, and even the latter is only worsened when the quality of water deteriorates; rarely does this have to do with ‘poison’.

Background
On 19th October this year, the second largest cage aquaculture farm in the country with about 4000 cages on the Lake Volta in Asutuare in the Eastern Region faced heavy mortalities. The farm lost tilapia weighing over 100 metric tons in biomass. The site was visited by several agencies including the 10-member committee set up by the Ministry of Fisheries and Aquaculture Development (MOFAD), to look into the issue, amongst others to ascertain the severity and possible causes. Samples were taken by the Environmental Protection Agency and Ghana Standards Authority for analysis. The immediate cause of the mortalities was unknown and rumour suggested a fish poisoning. This caused panic in consumers. The fear heightened as the media captured it without adequate facts. The plummeting fear also adversely sent tilapia sales in a sharp downward spiral. Within a week after the media report, the industry, from data gathered from farmers on the lake had lost an estimated revenue in sales to a tune of over seven million cedis (₵7,000,000). Tilapia consumption is dwindling.

The Reality
From all indications after assessment and analysis, the fish were not poisoned as being purported by some. I happen to be doing an epidemiology study on the lake, thus was observing for a while now. Earlier that week there was an upturn in the lake upstream; an upturn is a natural phenomenon that occurs periodically in the lake. Upturn is literally the turning over of water in a lake or river where the bottom water is displaced with the cooler top water. This brings up water very low in dissolved oxygen. This caused suffocation in the fish and eventually killed them

The mortality issue escalated alarmingly on the Fujian Farms due to already existing bad management practices. Dumping fish waste into the lake is a bad practice which was predominant on that farm. The engineering of the cages (i.e. layout) was also poor so water exchange between cages was very slow. Low flow rates of water that is of low quality to the fish created the perfect condition for high mortalities to occur quickly. End of story, 100 metric tons gone.

The last aspect that could have made mortalities this high was due to the fact that the Nile tilapia strain being farmed on that farm was not hardy, hence susceptible to the harsh environmental conditions that prevailed at that time.

The Argument
Water in the Volta Lake is not stagnant. If there was ‘poison’ traveling in the water, basic aquatic toxicology principles would indicate that a similar case should occur downstream even if at a lower rate assuming dilution occurs, which never did. Some indigenes consumed the so called ‘poisoned fish’ and yet there is no health record of hospitalisation due to food poisoning from fish after days of consumption. Yes, it could be that we are dealing with a toxicant (poison) which does not lead to an immediate effect but even then, some basic knowledge on fish mortalities in aquaculture, taking time to consult experts and accurate reporting of the incident itself could have cleared the air and led to better management of the crisis at hand without causing further damage to the industry. If our aquaculture industry dies, we will lose a lot- fish remains the cheapest source of good protein for the nation and the industry has contributed a lot in terms of job creation and food security. What is the alternative – going to bring fish grown in China?

Making Progress
Losses would have been minimised if there was an emergency response system to aid these farmers from the appropriate agencies. However, multiple agency representations on the lake makes it difficult for efficient supervision. The Volta River Authority (VRA), Fisheries Commission (FC) under the Ministry of Fisheries and Aquaculture Development (MOFAD), Environmental Protection Agency (EPA), Water Research Institute (WRI) under the CSIR and the Water Resources Commission (WRC) are all regulatory stakeholders in this industry. Streamlining these offices to present a coordinated front for the free development of the aquaculture industry will be a great move. Most farmers, because of this multiplicity of functions of these agencies, do not know who to turn to in crisis, hence resort to just the burying of their fish in the case of mortalities. We therefore lose valuable data that can lead us to improving the performance in the industry and ensuring that consumers get safe food.

Going forward, the government should make it a priority to establish a stationed lab close to the Volta Lake for preliminary analysis of mortalities and related issue reported from farms. Currently, we have only one standard fish lab serving the whole industry in Ghana. Farmers who have the means send samples even overseas for analysis due to queue and lack of reagents. The Universities that focus in aquaculture training could be better equipped to support and train experts to feed the industry. We have very few fish health experts in the country, considering the tonnage produced from this industry. Had there been an early diagnostic system already in place, these fish could have been salted into ‘Koobi’ and sold to cut down the margin of loss to the farmer. When a fish dies from lack of oxygen, there is nothing bad about that fish since it is the same process we use when we harvest fish – the fish being drawn with a net have to breathe air and since their gills do not have the capacity to do so, they die.

The sales of fish should be formalised in the aquaculture sector. The Fisheries Commission needs to enforce the aquaculture guidelines on fish quality control to certify the quality levels before they go off the farm to the markets. This especially important following the challenges the industry faces after this incident. If this is done weekly, consumer confidence would be restored. A pragmatic response from the Fisheries Commission devoid of excuses would help and even more so if they become the people that give out the information to the public. Good communication will be a good thing for the industry

Conclusion
The cage aquaculture farmers have done well to survive till now, considering the regulatory conditions they are operating in currently. Despite the interventions by the MOFAD in recent times, there is still a big gap to be filled. As a young industry, we need to take this opportunity to train journalists and educate the general public on what we do. This would go a long way to clear a lot of the misconceptions people have about the industry. As journalists, we can play a critical role in helping this industry grow; in our media reportage, we should try as much as possible to give out facts where we have them and leave out stuff we cannot prove. Tilapia from the lake until proven otherwise, is safe to consume.