I Won't Apologise For Inciting Students Against Government 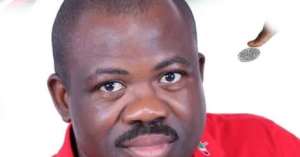 'I don't feel sorry for what I did, my reaction in the school came from what I saw and I'm sure that every other person with such emotion would have done worse than what I did," he told Accra-based Kasapa FM.

He continued: "The scene at the school and what the students are going through is so despicable that I never want to see the video recording again My reaction was totally out of shock.

"Did you see the skins of the students? It's such a shame. Even animals are not treated the way these students are being treated. Some of the students were chasing me and crying asking for just GHC1 to buy food. This is so bad.

'I don't see anything wrong with urging the students to shame the President, what did the NPP not say and do to ex President Mahama calling him all sorts of names.'

Mr Akamaba was heard telling students of Tempane Senior High School in the Upper East Region that president Nana Akufo-Addo and the government must be blamed for bed bug attacks in their school.

He made the students show their bedbug bite scars to the cameras, promising them their headache will be over by 2020 if they vote out the NPP.

He is also seen encouraging the students to reject President Akufo-Addo as he is the cause of their predicament.

"Shame on Akufo-Addo," he led the students to chant.