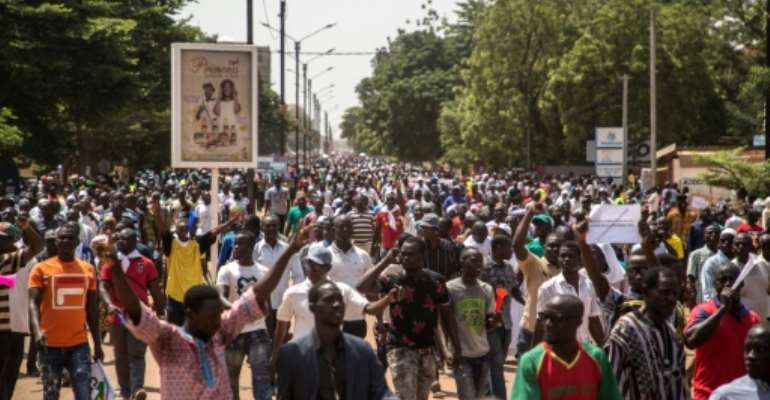 People gather during a rally in the Burkinabe capital Ouagadougou in the first large protest by opposition supporters against the current government's policy since the election of President Kabore in November 2015. By OLYMPIA DE MAISMONT (AFP)

Thousands of opposition supporters took to the streets of the Burkinabe capital Ouagadougou on Saturday, the first major protest against the leadership of President Roch Marc Christian Kabore.

"No to insecurity, terrorism, to corruption, to unemployment," chanted the protesters in the first such march organised by the opposition since the election of President Kabore in November 2015.

"We are here because the country is in danger," said opposition leader Zephyrin Diabre, rejoicing in "the very, very strong mobilisation".

Burkina Faso, which borders Mali and Niger, has been the scene of deadly jihadist attacks since 2015.

The north and east of the country have been the worst hit while central Ouagadougou has been targeted three times in two years, leaving 60 people dead.

Eight soldiers were killed by a blast in northern Burkina Faso on Wednesday, in the latest blow to the poor Sahel country.

On Sunday, three miners -- a Burkinabe national, an Indian and a South African -- were seized by armed men between Djibo and a local gold mine.

Hours later, three police officers deployed to help search for the trio were killed in a clash with armed men at Tongomael, about 30 kilometres (20 miles) away.

According to official toll figures published in mid-September, the jihadist attacks have cost a total of 117 lives, 70 civilians and 48 members of the security services.

Under former president Blaise Compaore, head of state from 1987-2014, the armed forces had a trained and disciplined unit, his personal guard.

But this unit was gutted by Kabore, leaving the country "without a military culture", according to a senior official from France, which is anxiously monitoring the situation in Burkina.