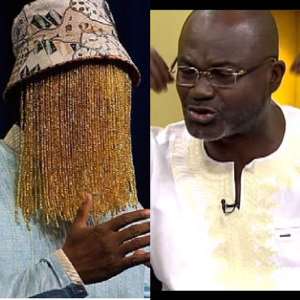 The Anas-Kwesi Nyantakyi issue has taken a different twist. Kennedy Agyapong is waging a campaign to discredit the man known for his impactful exposes, and the wearing of facial masks.

I agree with Ken Agyapong; the alleged method of extracting information from Anas’ victims look unethical, and blackmailing. I am not in this case impugning that Anas is blackmailing his victims to extort money. But if you set me up to become a victim, you are blackmailing me, and I believe that must not be allowed to persist.

The real investigation is when a Journalist tracks illegal activity, real time, to collect concrete evidence, in their naturally unfolding environment, and presents the evidence as prove of wrongdoing. Anas’ investigation into the Osu Children’s Home, where he became a worker in that facility, and filmed real time abuses, is an example of what is authentic investigation.

No matter how we feel about Kwesi Nyantekyi, it is wrong for Anas to set him up, induce him with corrupt money, and turn around to accuse him of being corrupt. We are all anti-corruption campaigners. But we must uphold the dignity of those we suspect to be corrupt. We cannot, in our quest to fight corruption, present ourselves in a manner that victimizes our targets, no!

We seek justice, and so in seeking this justice, we must ourselves protect our targets in manners that gives them the same justice we seek – fairness that ensures justice for all.

If Anas’ alleged method holds, in getting Kwesi Nyantakyi convicted, then he, Anas, himself, must necessarily stand accuse of bribery, because that is the law, the giver and the receiver are both guilty. So if setting up one person is good enough to achieve conviction, then the act of setting up the other person, regardless of the intention, must necessarily attract the equivalent penalty. We cannot save one, and leave the other to go, no!

I did not watch the last episode on the judges. My understanding of that expose was that Anas monitored some judges, on real time cases, as the bribing occurred alongside the twisted judgments, and that caused the judges to lose their jobs.

If that was not the case, then I guess I will like to agree with Kennedy Agyapong, that we need to revisit their cases. For if Anas and his Tiger Eye PI team, bribed the judges, themselves, and got the judges to twist judgment in the direction of their bribes, then we must take a look at the circumstances of the bribery, and how it might have impacted justice, or how it would have impacted justice, if those circumstances were not as artificial as it was presented.

I have also heard accusations of Anas blackmailing people to acquire high rise buildings. Of course these are legitimate questions to raise, if there is a reasonable cause to suspect so. If indeed Anas is blackmailing victims to extort money from them, then it raises serious criminal questions that needs to be investigated.

I have seen a new video from Tiger Eye PI, where it feels as though Anas is ignoring Kennedy Agyapong’s accusations, and calling his bluff. No! That is not respectful for those of us who admire your work, and who believes in you, that you hold a moral mantle, an integrity touch, and in whom we put our confidence, that you have become our bearer, to shine light on our darkest moments.

It is, definitely, serious to learn of some of these allegations, especially since we are aware that you, in the past, have done some investigations that never got released. What were the circumstances that prevented the release of those investigations? Were they part of the bribe collecting allegations that Ken has raised? We need answers.

If these allegations are not thoroughly dealt with, it has the potential to cast doubt on any anticorruption campaign that is waged in this country, and that will give corrupt men and women the courage to plunge our country’s resources.

So don’t ignore the allegations, even if you know for sure that they are untrue. You will have to go all the way to the courts, to sue Kennedy Agyapong for defamation, for libel, and for anything the law allows you, and you will have to take heavy compensation if you are proven to be innocent of the allegations. It is this way, of exonerating yourself, that will protect the rest of us, and instill the needed confidence to continue the fight against corruption.

Which means most of the income for Tiger Eye are from charges for services they render to their clients. The question then is, who are his clients, and how much do they pay the company? There are UN guidelines for charging clients per hour, and per day. Since Tiger Eye PI is a service company, it means they will have to conform to those per hour, per day charge guidelines. So it should be easy to verify income, expenses, and to ascertain obligations.

If the allegation of Anas owning several high rise buildings in prime areas in Accra, are true, then we will have to ask whether Tiger Eye has received contracts sufficient enough to acquire all those properties, especially within the spate of time the company began to operate.

And as someone who is fighting corruption, I expect that Tiger Eye, and Anas for that matter, should be fatefully paying their taxes. I expect the Ghana Revenue Authority to move in quickly to assess those properties known to belong to the anticorruption fighter, to satisfy itself that the man has diligently paid all of his tax obligations to the state. If he has not, and there is a clear case of deliberate attempt to evade tax payments, then Anas has serious questions to answer, of his integrity, and questions of his Journalism.

I have done it thrice in the past case or so, when under some hoax allegations, I published, fully, every single thing that belongs to me, and how I came by them – although they are only a very few assets with very insignificant values, and although I do not hold any legal obligation to do so.

Of course sometimes people wrongly assume that what belongs to the company, or the organization, belongs to the leader personally. So for instance, people see a giant cold store in Winneba and instantly thinks that it belongs to me personally. So those wrong attributions are common, but we cannot ignore them. We must provide answers when asked, just as we demand answers, when we ask.

I am a social entrepreneur. For the avoidance of doubt, I have decided to personally own nothing, even if the thing owned is in my personal name – that my children will have nothing as their inheritance from me.

I believe that is an important way for me to hold another person accountable. I cannot hide the source of my wealth from the public, even if I am a private person, but hold myself publicly in fighting public corruption, when I know that my tax obligations are inextricably linked to my moral courage to demand of the other person’s accountability.

We cannot present ourselves as thin gods, untouchables, just because we wear masks, we carry cameras, and we hold pens. We must hold ourselves as nothing as our calling demands, so that in presenting our nothingness, we shall be seen worthy of society’s light and trust. We hold the same obligations towards society, to live our practice, in much the same way as we hold public office holders to their office.