Revolution In The NPP 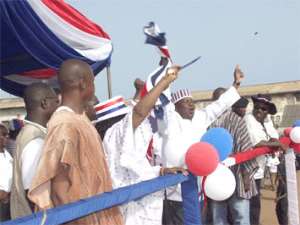 Last week, thre were verified reports that supporters of vice President Aliu Mahama and Madam Hawa Yakubu had a violent clash in Bawku. Many of Madam Hawa Yakubu's supporters including her Secretary Tanimu Sampoku and her mother Hajia Poku were brutally assaulted.

Both Madam Yakubu and Vice President Mahama were out of Bawku when the clash took place. Independent observers say that this could not be just a clash of the supporters of two presidential aspirants of the New Patriotic Party (NPP). It certainly goes beyond that. It is an expression of the frustrations of activists of the party and the internal struggle to renew party. Analysts say that a few more of such clashes should be expected in the run-up to the party's congress.

The NPP's attempt at renewal has centered on the different presidential aspirants and there is a growing concern that the party may suffer a serious electoral defeat if its fortunes are too loosely linked with the Kufuor administration. The difficulties the party is encountering now spring directly from public perception of the Kufuor administration.

The growing public perception that the Government has not done enough to fight corruption is hurting the party badly. This perception has been confirmed by surveys carried out by the Center for Democratic Development (CDD), the Institute of Economic Affairs, the African Peer Review Mechanism and others.

The President did not help matters when he said at Cape Coast that he would not expose corruption in his government because it will bring it down. President Kufuor also suggested that corruption cannot be eradicated because it has been part of human nature from the days of Adam and Eve. The Kufuor administration has also suffered irreparable damage from the Hotel de Waa Waa "scandal" currently under investigation by the Commission On Human Rights and Administrative Justice, (CHRAJ). The charge of incompetence is also beginning to stick on the Kufuor administration.