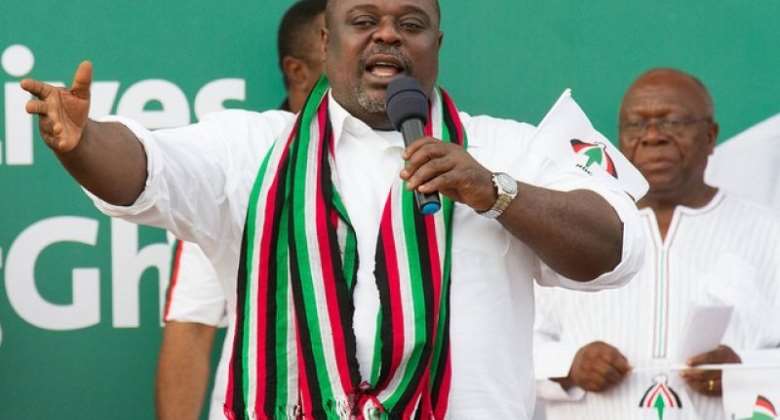 Koku Anyidoho has been arrested, for intimating a coup d’etat, and the civilian toppling of President Akuffo-Addo’s government, and he is reported to have been charged with treason.

On the face of it, that is the most appropriate response from the state to an irresponsible comment. Many, including his own party leaders, have condemned the comments as reckless and irresponsible. Hon. Mahama Ayariga, the NDC Bawku Central MP, has condemned Koku’s comments. Solomon Nkansah, the NDC’s Communication Director, has also condemned him. Mr. Johnson Aseidu Nketsiah condemned the comments immediately after it was made, but beat a retreat after he realized he could benefit from the media hype that was associated with Koku’s arrest.

I, personally, will not spare my words; the arrest of Koku Anyidoho, and the manner it was done, were wrong, and unwise. Koku could have been invited, quietly, by the CID for a conversation, without all the drama that followed his arrest.

I don’t need anyone to tell me that the man, Koku, is incapable of carrying out the comments he made. He did not threaten to overthrow the government – listen to his comments carefully. He predicted to make Ghana ungovernable, that was the import of his comments, and he was clear about the how he saw it unfolding. He had absolutely no subversive intention behind his comments.

Assuming Koku, in deed, did verbally threaten the stability of this country, does he have the capacity to carry out his threats? It was clear in his comments, that, he was only hyping the demonstrations that was being organized against the US-Ghana military agreement, hoping that there was going to be heavy participation that will sustain the momentum towards 2020 – I don’t think anything he thought went beyond this anticipation.

And of course he has his political self to preserve. Koku clearly was courting the media. To get the media headlines you will need to have some potent sound bites. He has an impending internal party contest that he is putting himself forward for. He wants to stay relevant, so he has to provide the relevant sound bites to attract grass root following, and that is exactly what he has been doing since the NDC lost power – putting himself out there to attract relevance.

I am not saying the security agencies should not have paid attention to Koku’s comments. They should. But they should have taken a look at the content more deeply, before making the arresting decisions. As it stands now, the government has scored an own goal. Koku has gained the attention that he has been seeking.

And I am not endorsing Koku’s comments. Like many others, I believe the comments are reckless, irresponsible, and somewhat annoying. But I don’t believe it constituted treasonable offense.

My understanding is that for an act to be taken as treasonable, there must be activities or pronouncements that should points towards treason. So for instance, if Koku had asked Ghanaians to rise, gather at Obra Spot, and match towards the Flagstaff House, to over-throw the government, and he had actually undertaken some mobilization efforts towards that gathering, that would have constituted treasonable offense. Or if Koku had actually mobilized men and women, armed them, and matched them towards the seat of government, with express intentions to over throw the government, that would have constituted a treasonable activity.

Trust me, Koku Anyidoho will walk a free man. The court will free him. He clearly had no intention to carry out any treason, and there is nothing in what he said that is treasonable. The comments are reckless and irresponsible. But they are not what you think they are.

I will not talk about what happened to Kennedy Agyapong when in 2012 he made a less potent comment in response to the frustrations he faced in the way Nii Lante Vanderpuije was inciting violence against the Akan dominated NPP in Odododiodoo. Ken had urged Akans around the country to rise up against Gas and Ewes who were residing in other Akan dominated towns in Ghana in retaliation.

Kennedy Agyapong was subsequently arrested and charged with Genocide, treason, and many other big-worded prosecution charges. It was everything to do with making sure that whatever guilt Ken was pronounced, he was made to face the death penalty. Then too I predicted that the arrest and prosecution of Ken was going to fail, and it did fail.

What are all these agitations about? There is a US-Ghana military agreement. The agreement, in all honesty, looks nearly exactly like the one that was signed some few years ago, by the same people who are opposing it today. Tell me, in all honesty, that, would the NDC MPs have opposed this agreement if they were still in power? Is it not because they have to oppose it for the sake of opposing it, that is why they are opposing it?

Go, educate yourself. Look for copies of the agreements which were signed in 1998, and the one which was signed in 2015, and juxtapose them with the current 2018 agreement, and tell me if there is any reason why the NDC should position themselves the way they are positioned.

I have said it, that the NPP would have also opposed it, the same way as the NDC is opposing, if they were still in opposition. They would have made the same kinds of noise, and staged the same kinds of walkouts, if they were not the ones in power – our leaders are not honest oo. They are the same people, NDC, NPP, they speak with one mouth, and respond with the other, and will lie or tell the truth, depending on whether they are in government or in opposition, always available to twist the facts to suit their selfish interests.

Trust me, the NDC will not cancel the US-Ghana military agreement if they should come to power tomorrow. They say they will cancel it? For where? They will rather strengthen it. We have too many examples to show, of opposition politicians who promise one thing, and do the other when they are voted into office. NPP promised to cancel VAT in 2001. What did they do? They increased it when they won power. NDC promised one time premium for NHIS in 2008. What did they do when they won power? They introduced NHIS capitation, and nearly collapsed it.

They never think of Ghana. We only think of NDC, NPP, all of us, pastors, imams, chiefs, priests, all of us have been turned into naked stooges of various kinds, rooting for NDC or NPP, regardless of the consequences on our land, and in the process we fail to tell them in the face that they are wrong (when they are wrong).

Anyway, those who have power will rule, regardless of who rules them. Some will see Koku Anyidoho’s situation as a payback time, for what was done to Kennedy Agyapong. Others will see it as showing power, for the sake of power, while still some will pretend that the Police is doing its work, by the arrest they have made.

Before I leave, permit me to refrain one of Ebony’s sensational songs “nde nkora aa yaaba, social media na yeda” (the youth of today live on social media). Don’t deceive yourself that because you had one million votes more than the NDC in the last elections, therefore it will take John Mahama one hundred years to close the gap between you winning, and him losing. Social media can change your destiny, and his destiny in a day. Remember the Kalypo story, and how it swayed the youth into voting for the NPP. Something could as well sway them back to where they were headed. Dey there, and laugh. You will soon know that waakye is still rice!